I Saw the Light | Teen Ink

I Saw the Light

Hank Williams, country singer extraordinaire, still has a home in hearts of country lovers today. But the legend was more than a legend. Portrayed in full flesh and color by director Marc Abraham in the 2015 I Saw the Light, the shining beacon that become a national sensation is chronicled through his rise to fame and fall.

Tom Hiddleston’s performance is the most gripping, who plays the title character in eerie physicality and spirit. A British actor known for his role in Marvel’s The Avengers as an Asgardian psychopath obsessed with Earth, Hiddleston converts his craft into the folksy southern charisma America remembers as Hank Williams. Hiddleston was initially cast for his uncanny resemblance to the singer, carrying the same witty smile and skinny physique; still, Abraham claimed to hit gold when Hiddleston devoted heart and soul to the task of reviving Williams. Every song in the film is performed by the actor, where Hiddleston accurately warbles away the famous “Lovesick Blues.” More importantly, Hiddleston succeeds in capturing the man’s magnetic, authentic charm, and his larger than life essence.

An important part of the film is his marriage to his first wife Audrey Mae Sheppard, portrayed by Elizabeth Olsen. Olsen is also a veteran of Marvel films, though the actors have never starred before together. She shines brilliantly on her own, as a less talented singer with dreams of her own, and who often clashed with Williams’ mother Lillie for his time and attention. Their fallout in love is shocking and hurtful. And while Williams loses none of his slow, oozing charm, we watch him his drinking addiction, back problems, and infidelity pull him downhill. It’s almost diligently tragic as we watch Williams spiral away, away from his loving audience and music.

The film has its own special kind of glamor. With suede, vintage-tinted cinematography, the movie mirrors the country music that moves it. Like Williams says in the film, “Country music--it’s sincere. When a man sings the sad, he knows the sad.” Admittedly, the movie isn’t as tight as biopics go. Sometimes it can feel as long as the precious few years of Williams’ career. Still, I Saw the Light is a moving ode to the country singer and star. With Hiddleston at the wheel, it makes for an even worthier ride. We see the light, too. 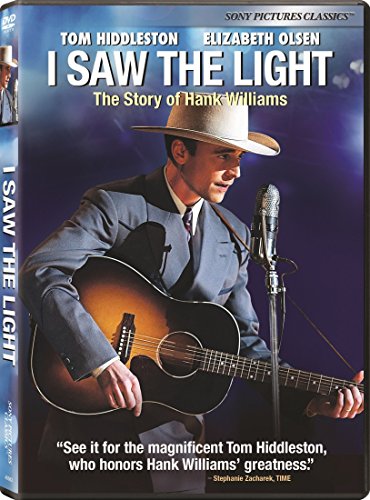