Snow White and the Huntsman

This is no fairytale. Coming to the kingdom by way of a phantom army, the beautiful Ravenna (Charlize Theron) charms the king and kills him. His daughter young Snow White (Raffey Cassidy) is thrown in the dungeon, and death crawls over the realm. Only after ten years Snow White (Kristen Stewart) is able to make a narrow escape, where she finds herself in the dark forest. The queen, convinced she must take Snow White’s heart to gain eternal youth, employs the vagabond Huntsman (Chris Hemsworth) to track her down, while the Prince of Snow White’s youth (Sam Claflin) seeks to find her. The forces of evil, darkness, and beauty will come to an end on the battlefield, between the Queen and her Snow White.

Snow White has always been tinged with a little bit of goth, but this is a darker telling than the likes of Mirror Mirror, a lighthearted romp starring Lily Collins released the same year. First-time director Rupert Sanders’ dark vision of this princess’ world is of dust, mud, and grit, and where Snow White must become a warrior to defeat the queen of crows.

Kristen Stewart, Twilight-famous for her portrayal of Bella Swan, Chris Hemsworth, world-famous for Marvel’s The Avengers, and Charlize Theron of Mad Max: Fury Road are the movie’s main players. That includes the Prince William, played by a doe-eyed, all-cheekbones Sam Claflin, now known for the romantic Me Before You and The Hunger Games movie quadrilogy. Snow White is not necessarily what you’d think it is, which may come as an unwelcome shock to Disney live-action enthusiasts. Unlike 2015’s Cinderella starring Lily James and 2014’s Maleficent with Angelina Jolie, Huntsman is more than an extrapolation, or villainess backstory. (Spoiler alert: the prince’s kiss doesn’t wake Snow White from her sleep.)

After watching the film a second time over Thanksgiving break, Snow White made a little more sense. Kristen Stewart, in my personal opinion, is the perfect dark beauty of this gothic fairytale, commanding poise as the ebony-haired lead. After watching Stewart in the 2014 Still Alice and Camp X-Ray, I personally believe she is a genuinely good actress. Her performance is balanced by Hemsworth’s swarthy Huntsman, and both of them by the domineering, commanding Ravenna. Theron is the evil queen, in all of her supernatural, tortured glory.

I got to watch the film after seeing the newly released sequel, The Huntsman: Winter’s War. The two contrast in plot and character, and it sometimes feels like everything criticized in Snow White was changed in Winter’s War, from the lighter tone, to the Great Evil they face. Still, both movies stand on their own, if out of sync with one another.

Snow White is consistently dark, and there’s something to admire in Sanders’ fantasy of gold, milk, oil, and tar. There are still loopholes in the plot, such as Snow White’s leap to warrior magnum, and sometimes shaky deviation from the original tale. Sanders’ magnificent world, if nightmarish, is made complete by bloody beautiful costumes, gritty scenes, and mud-stained battlefields. Or, as Theron put it, “the devil’s in the details.” This is one Snow White we won't forget. 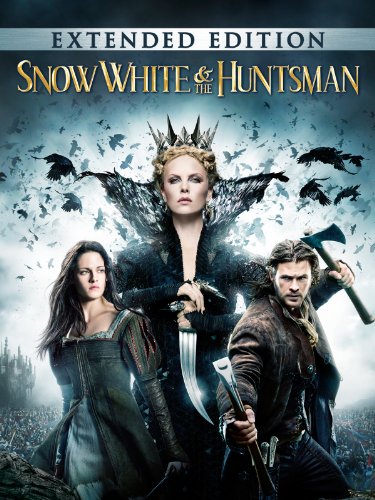