According to Detective Graham Waters (Don Cheadle), people are too far apart these days, yearning to feel something until they collide... And in the bustling holiday season of Los Angeles, California, we follow racial tensions all over the ladder. There’s the white lawyer who uses race as a political move; his white wife, who doesn’t understand her own unhappiness; a Persian shopkeeper who feels wronged as an American as his store is trashed repeatedly; a black and Hispanic detective who are occasionally lovers; the black detective’s drug-addicted mother, who urges him to find his brother; a white cop who uses his status to an advantage; his disgusted cop partner, who might be racist as well; a black filmmaker who feels like he’s being pushed around; his black wife, who believes he isn’t black enough; two black carjackers who suffer and satirize the pitfalls of being young black men; a Korean shopkeeper who hides secrets in his van; and a Hispanic locksmith, who just wants to keep his daughter safe.

Crash won several Oscars in 2005, controversially beating out Brokeback Mountain, another hot-topic film. It glitters with an all-star cast, with household names like Terence Howard (Empire), Sandra Bullock (The Blind Side), Don Cheadle (Captain America: Civil War), and Michael Peña (The Martian). There’s a reason for it, too--it’s one heck of a film. It takes place in a city where race is no novelty, and things aren’t as black and white as many black and white stories. We have black and white frontrunners, but also immigrants, and other ethnic groups that are more relevant than ever. The film operates at all levels of the social ladder, too, leaving the air so thick you can bite into it.

It’s an unpleasant reality check, too, as the F-bomb falls like rain, followed by seemingly endless racial slurs. I might be a bit of a romantic, but watching the film in sociology, there were times the movie felt destructively realistic, bitter and final. It keeps you on the edge of your seat, with twists as unpredictable as they are inevitable. The plot is literally so complex it resembles a myriad of zooming cars, doomed to speed past each other by a hair or end in a fusion of sparks and flame.

And yet there are no villains. While it might feel like a political move to not pigeonhole any one group, the film is about individual people. Nasty people do noble things, and those who resolve to stay out of the racial whirlpool of L.A. find themselves horrified with their actions. Perhaps the film is not so much about race, but rather its people affected by the concept, who are all human beings.

Granted, it might sound like a movie where everyone’s mad. But you see why; you see the consequences, the good, the bad, and just horrible. To reduce Crash to a film of hate and horror is incomplete. It’s also about people who are just lonely. As Waters puts it, they’ve lost their sense of touch. There’s something deeply American about that theme, even more so, possibly, than racial tensions in the City of Angels. The bluesy, featured track by Bird York, “In the Deep,” sums up that feeling with its sad, understanding undertones. Sometimes people heal. Sometimes they don’t. And sometimes they crash. 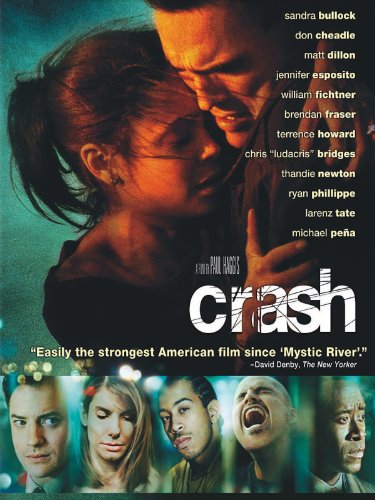