Mowgli (Neel Sethi) is just a babe when he is brought to the pack of Akela (Giancarlo Esposito), a just and kind alpha wolf. He grows up to be a man-cub under the care of the wolf Raksha (Lupita Nyong’o), all while Bagheera (Ben Kingsley), the sleek black panther who brought him to the jungle, worries for the day he will be forced to flee. That day comes when Shere Khan (Idris Elba), the terrible burned tiger of the shadows, declares the man-cub has no place among wolves, and to hunt him down as soon as the dry season’s “water truce” ends. So Mowgli embarks on a journey through the jungle, taking him into the path of the giant sloth bear Baloo (Bill Murray), the hypnotic snake Kaa (Scarlett Johansson), and the gigantopithecus ape King Louie (Christopher Walken). Mowgli struggles to find his place in the jungle, and figure out what to do, when the only thing the jungle fears more than Shere Khan might be man.

All things aside, The Jungle Book is a triumph of tech. The sheer personality of the jungle, whether menacing, rich, or mysterious is captured by rolling green screen. It’s not just the jungle that’s captivating to behold: every animal, big or small, is weirdly fascinating to watch animated on screen. It’s a mysterious cross between the real and the CGI, since the young actor who plays Mowgli is very much real, while the rest of the jungle is not. We’re reminded why we’re so fascinated by animal stories in the first place, symbols of our simplified selves. Director Jon Favreau, famous for Chef and Iron Man, leads the production that leaves you wondering, How did they do it?

Neel Sethi, the brilliant young actor who gives Mowgli charm, sits at the heart of the film. You’ll look at other big names in the roster, and wonder how everyone got signed on. From Oscar legends to action stars, it could be because Disney film adaptations are all the rage, or because the story is just...good. Coming after Disney’s animated The Jungle Book in 1967, and the book before that by Rudyard Kipling, The Jungle Book in 2016 captures the original magic with a modern touch. There’s the wonderfully clever Law of the Jungle, for example, a Seeonee code of honor all animals obey, and elephants hailed as gods of the jungle. There’s fire, the jungle’s greatest fear, dubbed simply the “Red Flower.”

And it’s incredible, as we see the world through Mowgli’s eyes. The film could have stopped at its bewitching visual effects, and instead creates a genuine jewel of a movie. The dialogue, the heart, and the laughs from Baloo the bear are finely balanced, leaving room for the greater analogy of the “jungle.” Mowgli’s just being “different” from all other animals makes us form a connection with him, man’s creativity represented as Mowgli’s frowned-upon “tricks.” He is told he has no place in the jungle, and must make a decision between civilization and his jungle home without throwing away both. Or, those willing to hear a good story can pick up the jungle book, and read. It’s all there. 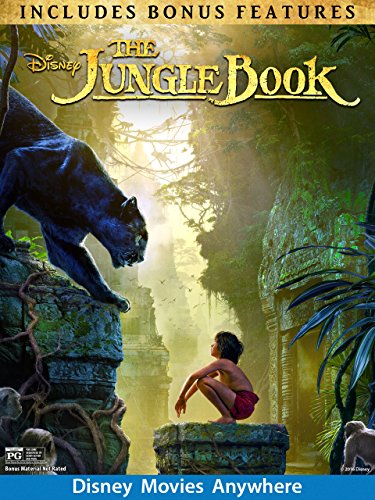