Fantastic Beasts and Where to Find Them | Teen Ink

Fantastic Beasts and Where to Find Them

We return to the wizarding world in America when quirky magizoologist Newt Scamander (Eddie Redmayne) lands in New York. It’s the Roaring Twenties, and at his side is a weathered case of magical creatures, filled with passengers like the fat, smug Niffler, wise Demiguise, and soaring Thunderbird. But when Scamander’s case is opened, chaos breaks loose on the golden city, and underlying tensions between magical and non-magical communities threaten to erupt. With the aid of magical government Auror Tina Goldstein (Katherine Goldstein), her darling sister Queenie (Alison Sudol), and the unsuspecting Muggle “no-maj” Jacob Kowalski (Dan Fogler), Newt must capture his creatures before darker forces rise, and set the stage for the wizarding story we know so well…

The premise is simple: here there is no prophecy, no greater powers at work. That is, except for the mysterious silver-haired menace, Gellert Grindelwald, who we see briefly at the beginning of the film. This infinitely dark wizard predates Lord Voldemort, and is given a face by the ever-chameleonic Johnny Depp. But that’s for later; most of the film, we follow Hufflepuff Newt Scamander off a boat at Ellis Island, with whom we experience a sense of wonder in a new land, and new magical world.

His case of magical creatures is certainly the highlight of the film. The strange, quaint creatures are cousins of animals we know today, like the ape-like Demiguise and eagle-esque Thunderbird. Other notables include the rhino-like Erumpent, for whom Scamander must perform a strange mating dance, and the soundly loyal, fern-like Pickett, who stands by Newt. Then there’s the most magical of all, the small, crafty, long-snouted cross between a platypus and an otter, with an affinity for all things that shine: the Niffler.

The entire production is amazing, with a touch of childish sweetness. And while Newt’s creatures steal the show, there are still moments of true darkness. When Newt arrives in New York, an anti-outsider sentiment rides high, and a local cult who call themselves the Second Salemers are hellbent on decimating wizardkind. Wizards live among us! is the titillating cry of the movement’s first soldier, the hard-hearted Mary Lou, who teachers her three adoptees rhymes from centuries ago, echoing the Salem witch trials.

While the universe of Harry Potter, J.K. Rowling's original magical story, takes place in a cape-wielding, medieval bubble, Fantastic Beasts and Where to Find Them bridges the gap between two different worlds. There’s the Magical Congress of the United States of America, MACUSA, set against the capitalist face of the ’20s, Senator Shaw and his buddies. The old cinematic trope, This could mean war, accurately reflects a xenophobia that has taken New York.

It’s from this tension something tragic is born. Credence, one of the children Mary Lou adopts, is a searing metaphor for children trapped between two worlds, and who cannot help but exist in both. Played by the head-bowing, shuffling Ezra Miller, Credence is singled out by the powerful MACUSA investigator Percival Graves, played by Colin Farrell. Credence turns out to be an immensely powerful young wizard, whose tormented powers manifest themselves in an Obscurus, a twisting black energy that destroys everything in sight.

My orchestra teacher, in a brief history lesson, claimed art often reflects current events, and Rowling, author of the film’s screenplay, seems to have taken direct notes from the refugee crisis in Syria. On Twitter, the crisis often showcases stories of children that become part of the wreckage. The concept of an Obscurus is uncomfortably familiar, as we see the metaphorical equivalent of abusing a child for being different.

I read the screenplay for Fantastic Beasts before I watched the film, though I have not yet read the “Hogwarts textbook” written by J.K. Rowling for a charity event, Fantastic Beasts and Where to Find Them by Newt Scamander. To say the least, I found the story shockingly different on screen, where a few lines and transitions become real people and events.

And because characters drive the story, some criticize Fantastic Beasts for lacking the strength and diversity of characters from Harry Potter. We have the anti-hero Newt Scamander for Chosen One Harry Potter, and Porpentina “Tina” Goldstein” is no Hermione Granger. Queenie Goldstein and Jacob Kowalski also don’t fit the Hogwarts mold. For some reason, I found it especially hard to warm up to Tina’s character. She seemed a bit vague on the page, and as my mom and I were discussing, it might be intentional--Tina is the “career girl” who has been constantly hushed, ridiculed, and pushed out of the way, and whose hesitant demeanor is not always welcome in the movie theater. But they are certainly a lovely pair, Newt and Tina, and Queenie and Jacob are just sweet.

We’ve been promised four more films in this increasingly epic franchise, as the threat of Grindelwald extrapolates. It might seem like “they” are milking it, making five movies from a book mentioned in a book that was made into a book. But, quoting another Fantastic Beasts review, four more magical films are much more stomachable than four more Transformers, and can do much more good. After all, even if the creatures are the spotlight of the film, director David Yates translates his Harry Potter charm into a film with real heart. Whatever lies ahead is sure to be fantastic. 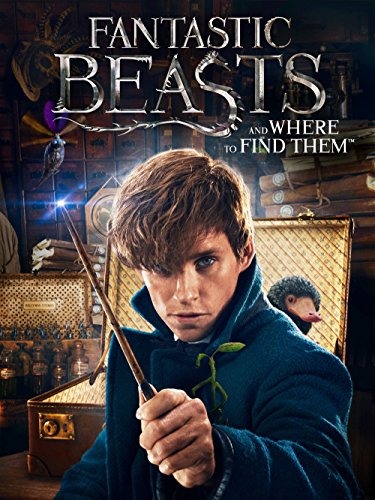