He would never touch a gun, but enlisted in the WWII. Desmond Doss (Andrew Garfield) would become the first conscientious objector to win the Congressional Medal of Honor. In other words, he believed killing was wrong, though the American cause was not. He enlisted from his home in the drawling South, leaving behind sweetheart nurse Dorothy Schutte (Teresa Palmer). Entering a brood of soldiers who deemed him a coward, Doss had to hold on to his beliefs in the barracks and in court before advancing to the front lines. At the battle of Okinawa, he served as an army medic, and when an advancement of troops failed to overcome the seemingly undefeatable Japanese, Doss remained, hiding on the ground when others retreated, working against enemy, sniper, and elemental fire to save just “one more” human life. In the end, with two hands, he saved seventy-five.

There aren’t many spoilers, since everything has gone down in history. Doss’s little-known story defies belief, as few of us have heard of the man who served his country without firing a bullet. And it might sound too good to be true, but director Mel Gibson, famous for Braveheart, gives blood, heart, and truth to a story of a man long overdue. Sweet, skinny Garfield (in fact British) reanimates Doss with the straight-laced Southern charm of a man who would be dubbed Private Corn Stalk. The first half of the film is the same: sweet and cinematic, almost running the routine man-against-world “WWII story.”

But there’s something very genuine about this young man. His love affair with Palmer’s Schutte could have been a well-worn cinematic trope, a Nicholas Sparks organza with 40s and 50s war paint. Instead, the deep connection Doss and Schutte find in each other is reflected sweetly by Garfield and Palmer. And while Doss could have become a caricature for Christian righteousness, Gibson takes care in presenting his one-man cause: founded on his beliefs, which Doss struggles to protect. There’s something deeply American about that.

And not only is all of it real, it’s incredible. On the field, Doss is clear-minded, calm, working as a medic for soldiers on the front: the scraggly, ugly mini-mountain called Hacksaw Ridge, whose tunnels conceal hidden Japanese. It’s why continuous Allied air bombings do them no good, while American reinforcements pile in to be butchered. And to put on paper Doss saved seventy-five men is no small feat: in the film, we watch Doss wriggle, crawl, and rope down countless wounded men, some even wounded Japanese, over the course of a neverending night and day.

Again, and again, and again, he works the ropes to lower bloody patriots to where they can receive medical help. It’s visually arresting to watch the only thing that keeps Doss clinging to consciousness, his faith. “Lord, help me get one more,” are Private Doss’s own words, as seen on camera at the end of the film, before his death in 2006. Simple, yet powerful: like his acts at Hacksaw Ridge. 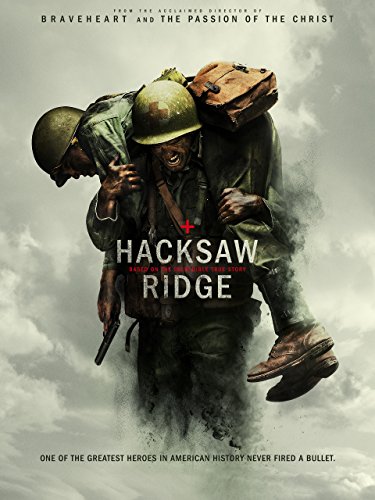