Princess Diana, daughter of Zeus, trains to be a warrior on the island of Themyscira. But when a man washes up on her shores, claiming to be a soldier from the Great War, she takes it upon herself to end the fighting in what she is convinced is the war to end all wars.

It’s time; after a reputed 76 years since the Amazonian princess graced comic books worldwide, Wonder Woman rockets to the big screen in one of the first female-led, female-directed superhero(ine) films in over a decade.

The film feels revolutionary, and in a political climate where women feel like a minority more than ever, this story has power. Director Patty Jenkins has a clear artistic vision (and perfect comic timing), allowing Wonder Woman to make waves for a new generation. As a superhero-movie fangirl surrounded by superhero-movie girlfriends, it was only after seeing this movie that I realized we had been waiting our whole lives for something like it.

Because in some ways, “Wonder Woman” makes history. At the beginning of the film, Allied spy Steve Trevor is rescued by Diana, Little Mermaid style, and his pursuers follow, invading the beach. In response, all the warriors of the island race to the beach to defend it. Women warriors race across the screen, on horses and roaring, battling, spearing, arrowing, fighting.

These action scenes took my breath away. I got goosebumps when Diana raced across no-man’s land, determined to free a small village mired in war. As a young woman who takes self-defense and believes she could pull off a Mulan-type deception if she had to, I felt my own glass ceiling shatter. These women fight in all their demigod glory, without being blatantly sexualized. They fight to kill.

True to Diana’s origins tinged with Greek lore, the women’s costumes are leather, silver, and gold. And while there has been controversy over Wonder Woman’s suit, it appears familiar and lightweight during battle sequences. The entire film’s color palette is sumptuous, accurately depicting each time period and setting.

Actress Gal Gadot plays Diana Prince, a soldier emerging from her isolated paradise, where she trained with female Amazonians all her life, dreaming of the glory of battle. She is a fantastic fighter, and General Antiope (played by Robin Wright from “The Princess Bride”) resolves to train her harder than any other Amazonian before. Diana dreams of the island’s sacred weapons: including a magnificent sword called the “Godkiller,” which comes with a clever twist.

But at the warfront, it is Diana’s beliefs that are under attack. This war among men is not as simple as it seems. Her original decision is to find and kill the Greek god of war, Ares, whom she deems responsible for the carnage. Her island’s lore claims that when the source of all evil is slain, humans will be free and return to their natural state of goodness. It takes time – and a few epic battles – for her to realize this is not true. That learning arc is essential, even for a heroine who can punch her way out of anything, and it makes Diana a credible, wise hero.

The casting is deliriously good. While the Israeli Gadot appears to switch Diana’s iconic blue eyes with Chris Pine, who plays Steve Trevor, both actors look, act, and breathe the part. The actress, sincere with a weapon and a voice of a leader, has her own street cred – Gadot served as a soldier in the Israel Defense Forces and was studying law before she landed the part. She is badass, if not insanely beautiful, strong, and confident. Pine, of course, is plenty beautiful in his own right, with a semi-naked “bathtub scene” that smirkingly flips gender roles. As the love interest, he is likable, intelligent, respectful, and very funny. Their love story takes up just the right amount of screen space. Jenkins knew she would be under fire to create the perfect love story for what everyone saw as a female superhero movie. And, cinematically speaking, their love is bound to pull heartstrings.

My personal response to the film was overwhelmingly good. I was constantly getting chills or laughing at a joke (which weren’t ever awkward or crude). The film is funny and fun.

I can see, however, why feminists may take issue with a few of the details. Although the movie was directed by a woman, there are still lines about Diana’s paralyzing beauty (she is a god) and how it is “distracting.” New to the outside world, Diana is also constantly being treated like she doesn’t know what she’s talking about. The only thing I couldn’t get over was the fact that everybody, even men, kept touching Diana – authoritatively, commandingly – in a way that didn’t happen on her island. And while we know Steve is a “nice guy,” it was unnerving how often he pressed her backwards or grabbed her arm to stop her. After all, Diana is conscious of the need to spring into battle any minute – in one scene hilariously trying on different dresses that allow for little movement. It didn’t make sense to me that she would permit people to physically manipulate and restrain her.

Perhaps it had significance: Diana is constantly being told no, verbally and nonverbally, so it’s a victory when she breaks free. It may also represent how women are too often treated in real life. And as Michelle Wolf described on the “The Daily Show with Trevor Noah,” people put too much pressure on “Wonder Woman” to be politically perfect – as though all women’s success or failure hinges on it.

At least we can all agree the film passes the Bechdel test with flying colors, as more than two women talk about things besides the man they love. In fact, there are women everywhere, and diversely so, including the scarred, mysterious “Doctor Poison,” the German scientist who comes up with a breed of even deadlier mustard gas. Unlike the women of Themyscira, her power comes in a different packaging: intelligence.

My friends and I left the theater in a happy, hugging daze. The film sends the right message to audiences. To young girls, it’s solid gold. 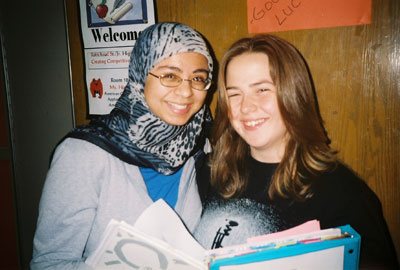 Favorite Quote:
Everyone is a genius, but if you judge a fish by its ability to climb a tree it will live its whole life believing it is stupid. - Albert Einstein

View profile
I completely agree with HereSheIS. Amazing job! You did a great job! I admire you for revealing important details without giving away any significant spoilers, which I struggle with when writing reviews.
HereSheIs BRONZE said...
on Jun. 19 2017 at 5:11 pm
HereSheIs BRONZE, Wellesley, Massachusetts
3 articles 0 photos 187 comments

Favorite Quote:
"We can easily forgive a child who is afraid of the dark; the real tragedy of life is when men are afraid of the light." -Plato

View profile
I loved the movie, and your review says everything that's awesome about it, as well as its few flaws, one of which I didn't pick up on till you pointed it out. WONDERful job :)