“Raise the Red Lantern” is many things – an entrancing mixture of horror and the beauty of a China long past, an allegory, a myth, and a warning. Despite its many faces, “Raise the Red Lantern” is always painfully gorgeous and rife with suspense. Unlike the hundreds of movies that Hollywood has churned up in the past decade, this one does not need an award-winning soundtrack or a host of endorsements to gain attention. The spirit of the film speaks for itself, mysterious title and all. A trademark piece of 1990s Chinese film, this Zhang Yimou classic is anything but ordinary.
Nineteen-year-old Songlian (Li Gong) has just been forced out of a college education by her elusive stepmother, a woman whose voice seems kind enough but whose face is never seen. Indeed, several faces are not clearly seen in this movie, including that of the man Songlian is sent to marry.
Although it is clear from the beginning that our heroine has no wish to marry a man she does not love, she is taken from her home and caged in her husband’s ancient compound. She is the newest member of the Chen family, officially titled “Fourth Wife.” Her very existence within the Chen palace-of-sorts relies upon her ability to produce a son. Of course, maintaining her status would be much easier if not for the three other wives, all of whom wish for the mercurial favor of the Master (Jingwu Ma), who hangs a red lantern outside of a wife’s living quarters when he intends to spend time with her. In essence, the power of each woman depends on how many nights the red lantern hangs above her door, for with it comes the hope of offspring and a boost in her status.
Songlian’s isolated life is not pleasant. Behind the silk dresses and fine delicacies, Songlian feels she is in a prison of red lanterns, snow, and deception. Betrayal is a tradition in this household, and it poisons everyone who comes near.
Songlian finds that the least trustworthy of faces harbor dark secrets, and that some of the nicest faces harbor even darker ones. The Master may choose to believe that his world is full of gaiety and delight, but his concubines see past this facade. Songlian finds her new world to be a labyrinth from which she can never escape. This is a setting in which women are objects forced to fight each other and resort to revenge, gossip, and even murder to get what they want, all for temporary happiness.
True to its magnificent title, “Raise the Red Lantern” is obsessed with the color red. And well it should be, for the suggestive hue makes the difference between Songlian’s inner emotions and the cold world she has been sent to live in all the more intense. There is no clear indication of what the red represents. It could be the death of the feudal lifestyle in China, luck, fertility, or even sin. Red is traditionally a lucky color in China, and may serve as a cynical reminder of the incredibly unlucky situation the women in this film are in. Red is present everywhere. It haunts the viewer and dims a movie that could not be more perfect.
The movie is desperately sad, partly because it sheds light on an era of Chinese history that is no more, and that was in many ways as dark as it was lovely. But there is also hope – if you choose to look for it – for what the future holds. 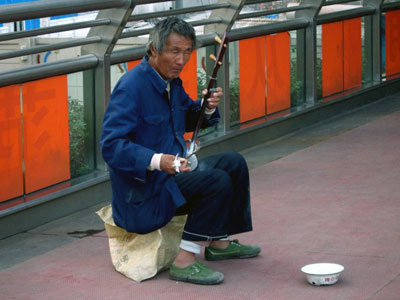