What a Wonderful World by Louis Armstrong | Teen Ink

What a Wonderful World by Louis Armstrong

Many methods are used to help a song stand the test of time. If the title is repeated throughout the song, people remember it a lot easier. Having deep, touching, yet understandable meaning and an accompanying video clip that is memorable contribute to helping a song stand the test of time also. In this essay, I will be analyzing the song “What a Wonderful World” by Louis Armstrong. It was written in 1968 during the time of the Vietnam War. Performed in the genre of jazz, it was writing and composed to try and bring hope to the millions of victims suffering the effects of the war like the loss of the many loved fathers, sons and husbands and the “half cast” children who were sent away from their mothers to a foreign land with foreign people.

“What a Wonderful World” is not only the song title but the chorus too. This line is repeated four times throughout the song to emphasize the fact that even though there is much hatred and violence within the world, it is still beautiful and there is always the chance for us to stop the pain and make life peaceful again. It’s telling us to always hope for the best because it’s not an impossible dream. “I See Trees of Green, Red Roses too” is the first line of the song, telling us straight away that there is always a chance for improvement and a chance to grow. I believe that this is the opening line because it immediately shows us that the song will be focusing on the happier side of life instead of the turmoil and that it’s better to be positive rather than negative. The line “The Bright Blessed Day, the Dark Sacred Night” was carefully worded. With use of specific words like blessed and sacred, it is presented that it’s quite a safe surrounding and that we’re being looked after. Using these words instead of more negative words like black gives the song a more soothing feel to it and relaxes people who listen.

“The Colours of the Rainbow, so Pretty in the Sky” can be taken in many different meanings. The most recognised and shared view would be that the rainbow is the show that the storm is over and clearer, easier times are ahead. In religious views, the rainbow is the promise from God to his people that he will never drown them all again, being a sign of hope to all. The reason I believe that the line “They’re really saying I Love You” was written into the song is because people meet and greet each other with happy hearts every day, and though they don’t always say it, they express that they love each other in many ways. “They’ll learn much more than I’ll ever know” is expressing that overtime, more and more knowledge is acquired when a new person is put in charge and the more knowledge gained on higher up levels, the more knowledge is passed down to younger people and though Louis Armstrong is older than children, by the time they are his age, they will have had the opportunity to learn more than he has.

“What a Wonderful World” is a song containing six instruments: the violin, the drum, the flute, the double bass, the trumpet, and the harpsi chord. All of these except the flute are played throughout the song. The flute is played at a specific time though. During the third verse of the song the flute is introduced. It is played parallel to “The colours of the rainbow so pretty in the sky” to enliven the line and is then played through the rest of the verse to put it on a happier note than the rest of the song. Alongside “And I think to myself what a wonderful world” the music goes noticeably higher. The reason is to show that the world really is a wonderful, happy place despite the disaster. The line “I see friends shaking hands saying how do you do” is accompanied by ooh ahh’s to emphasize the happy, hopeful feeling that the song as a whole is trying to tell. At the time of the original producing of the song the Vietnam War was happening, hence the inspiration for the song. The Vietnam War was a very eventful time in history, causing many deaths of not only soldiers but many innocents too. Many husbands, fathers and sons didn’t return from the war but many families and homes were completely destroyed. Many Vietnamese women also gave birth to children fathered by the soldiers. These children were considered half-casts and sent away to places like America because they were not welcomed by Vietnamese society. Some of the mothers of these children became very depressed and some went so far as to commit suicide. The effects of the war are still around today, just not on as such a major scale but the victims of the war will never forget those lost.

“What a Wonderful World” is one of the many songs that have stood the test of time. Through its music and lyrics it tells us that when it seems all is lost and that despair is in our hearts, there is always a hope for the future. Though it was written during a time of terrible turmoil, it promised us a hope for a better future and showed us that we can always come out on top. Louis Armstrong was a black American who faced prejudice and bitterness towards him and yet still felt enough joy and hope within himself to produce such a loving, touching song. The song spoke to many people of different races and religions. It told us that no matter what you look like or who you are, things can always get better no matter how bad they seem. 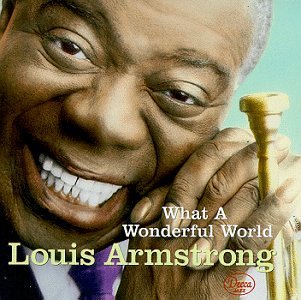 
Buy from Amazon Available on iTunes
The author's comments:
it was actually my music essay from last year on songs that have impacted society.
Post a comment
Submit your own