This album has been one of my favorites from the Foo Fighters. Not only did it prove that the Foo Fighters are standing strong after so many years of great music, it proves that they can be versatile. Two of my favorite songs from them are “Long Road to Ruin” and “The Pretender.” “Long Road to Ruin” is a funny song that goes perfectly along with the video. It's an upbeat happy song that you can rock out to. “The Pretender” on the other hand is a hard rock amazing song that will get you banging your head the moment you hear it. They have so many more awesome songs and the softest one that is so sweet and loving is “Home” it's a soft rock ballad that represents the war and how the soldiers should come home. The Foo Fighters are one of my favorite bands of all time all there music has brought inspiration to me. Their songs are fun, heavy, and sometimes sincere. And to think the lead singer Dave Grohl was a drummer from Nirvana. And he has come to be one of the BEST singer/songwriters and guitarist the Music Industry has ever seen. So kudos to you Foo Fighters, and keep rockin'. 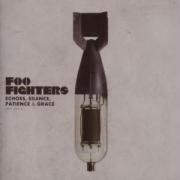 Previous Next
Reviews
Metallica - The Black Album
By Levi BRONZE