Froot by Marina and the Diamonds | Teen Ink

Froot by Marina and the Diamonds

Marina and the Diamonds, or singer Marina Diamandis, had already completed two full-length albums when she released Froot in 2015. Stripped of her Electra Heart ego and her bottle blonde locks, Diamandis finds new heights in the rich new world of her music. Like the cover art, the songs are set against a pitch black sky, where specks of color and brilliance illuminate her path. Where her former albums burned on dirty gas, like a shooting star doomed to fall, this album moves on solid ground. And it’s the sweetest one yet.

While the tone of this album is clearly different, Diamandis still reaches new levels of divinity. Froot is as artistically buoyant and emotional as ever. Instead of the titular track, it begins with the song “Happy,” a surprisingly choice for the artist. The song is like a beam of light, streaming through the stars. Unlike the raging energy of her other albums, her voice is cast into the spotlight, alone. The song is touched with divinity, and added voices combine to create a gorgeous, crystalline gem. Then, we are given “Froot,” a disco-happy song that’s another kind of dreamy. Her powerhouse voice is just kicking off, and animates the luscious landscape of her rainbow “froots.” “I’m A Ruin” is set in the sands of time, where Diamandis mourns. Laden with grief, it’s heavy like a fruit about to fall. “Blue” lifts our spirits with upbeat instrumentals, expanding into an anthem of rock. It’s exciting, and full of sun, but not without substance. With all of Diamandis’ work, every word matters.

While Electra Heart was arguably the sequel to The Family Jewels, Froot is cut from a different cloth. It’s richer, fuller, often filled with waves of grief. And with it, comes a completely new sound: whispering layers of her own voice create backup singers like shimmering stars, and can be found as a trademark sigil throughout her songs. “Forget” brings us back to earth, in deep melodic rock, until “Gold” pulls us back into the sea. We find ourselves at the bottom of the ocean, the song as chirpy, sweet, and remote as a beach vacation. “Can’t Pin Me Down” is dangerous, bitter, and in the same path, “Solitaire” also takes to the watery depths. Only now the lake is clean of ripples, blissful pure, and as brilliantly cut as a jewel.

Diamandis’ words are always at the heart of her work, which make it so universal. As we look inside the ever-present jewel of her music, the diamond, we’re pulled right back in. “Better Than That” is dreamy, and yet cynical, where her sharp voice and words flower between verses. Filled with memory, and fleeting glamor, “Weeds” is exultant. “Savages” is a special jewel: her voice opens up a shocking narration of the greatest sins of modern society. Her simple lyrics are as powerful as ever, and she touches the deepest, darkest parts of our human story. Finally, “Immortal” is the end to our latest adventure. Like an angelic, distant star, it yearns for something eternal. Indeed, Diamandis’ voice succeeds in exceeding humanity. And in doing so, it’s the perfect sum of the album. The froot has become a jewel. 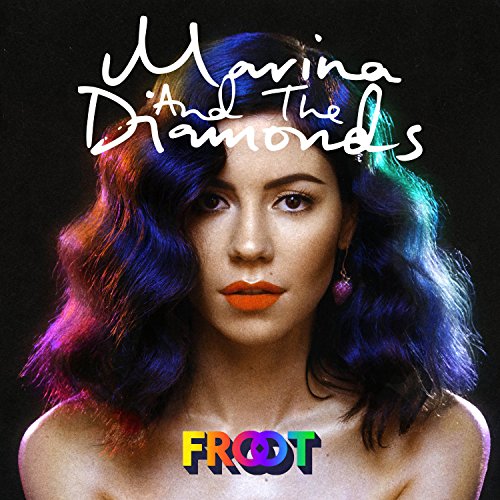