The Secret Life of the American Teenager | Teen Ink

The Secret Life of the American Teenager

You know the feeling you get when you see a well-made TV show, with great acting and an intriguing plot? Be prepared to bid adieu to that wonderful emotion before you sit down to see the atrocious monstrosity of a television show that is “The Secret Life of the American Teenager.” Created by Brenda Hampton in 2008, “Secret Life” makes it a goal to find any teenage cliché and exploit it – various times.

The show centers around 15 year-old Amy Juergens, a teenager who is saddled with an unplanned pregnancy. Though Amy only does the deed once, it turns out that once is more than enough for her uterus to start cooking up a baby. The first season follows her pregnancy, and the second season – so far- chronicles her exploits as a teenage mother.

If ABC Family's purpose in airing this show was to send teenagers the message that all teenagers are immature, whiny, sex-driven animals, they struck gold. Amy Juergens is the very picture of selfish immaturity; ninety percent of the show is centered on her whiny, judgmental comments. There are no redeeming qualities whatsoever in this character, a sad fact that ruins the already comatose show.

Maybe if “Secret Life” had semi-decent acting, it would be more interesting. No, instead, we get dull, scripted actions that simply increase the growing urge to bash your head against the TV. What started as a follow up to increasingly popular films such as Juno turned into a stilted, abysmal joke of a show. If there was ever a show that jumped the shark before it even began, this would be it. However, if you have a hunger for shows that drag, and characters that whine almost as much as the overpaid actors that play them, then “The Secret Life of the American Teenager” is for you! 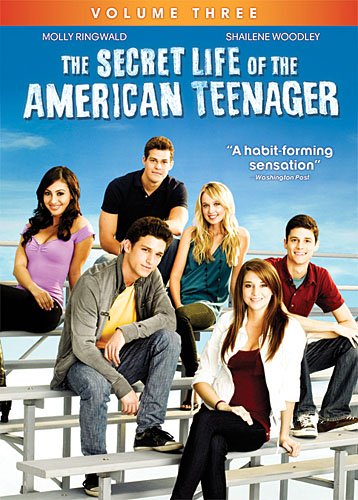 This article has 70 comments.

Favorite Quote:
Every writer has to take a risk sometimes

Favorite Quote:
Heal the past; Live in the present; And dream the future!!

View profile
I totally agree with you.
Emmmmmie said...
on Dec. 8 2011 at 6:31 pm
Soooo... i LOVE this show. i honestly do. i just love all the drama, and the little fights, and the stupid things they do that they later "regret". But after reading this review i laughed sooooo hard. this is honestly so true, but this is why i love it. the acting is the worst,but although the acting IS horrible, the points are whats true. I look forward to monday nights on ABC Family, and every new season. I love the first days and the last days of the season when they play all the shows all day long. I honestly LOVE LOVE LOVE htis show, but i totally agree with this!!
RedStory said...
on Nov. 27 2011 at 10:14 pm
This made me laugh so hard. The show has made it's message obviously clear: don't have sex, cause you will get pregnant, and die. (Mean Girls reference). The characters have no substance whatsoever; all they ever seem to do on this show is have sex or talk about having sex. I know that is what people think actually occupy a teenagers mind 24/7, I just didn't think they would make a show about it. It feels as though the actors are just reading off a telepromptor; all they ever do is cite their line - there is no real emotion/reacting involved. There are definately more and better t.v. shows that cover not only teenage pregnancy, but a wide range of issues. (Shocking, right?)
gemar BRONZE said...
on Oct. 9 2011 at 2:16 pm
gemar BRONZE, Glendale, Arizona
2 articles 0 photos 4 comments
View profile
Although you have some good points, i pretty much completely disagree. Yes this show presents some bad influence, and has whining, but the show itself, as a WHOLE is good. I believe that even though you have a bad influence there, doesnt mean you have to repeat it? I mean, anyone who has good morals and is strong can avoid situations like these, or if they are in these situations, just be able to say "No"! I hope i did not offend anyone by this, this is just merely my opinion. But a nicely written article if i do say so...(:
boo2 said...
on Sep. 22 2011 at 9:13 am
this an't just for that!!!!!!!!!!!!!
BreakMyEmotions said...
on Sep. 15 2011 at 8:36 pm

Honestly, I love this show. The plot sucks and so do the actors and actresses; though, I do feel they've gotten better over the years.

The reason why I love this show is because it can be so bad and overly dramatic and full of cliche that it ends up being hilarious; I end up cackling to myself.

Boy, I love this show.

Favorite Quote:
I have a rosy sky and a green flowery Eden in my brain; but without, I am perfectly aware, lies at my feet a rough tract to travel, and around me gather black tempests to encounter.

View profile
THANK YOU SOOO MUCH FOR WRITING THIS.  My friend made me watch it with her and the entire time I felt like i was just going to die because this show was so bad.  Finally someone understands!
ShontelleSymone GOLD said...
on Jul. 29 2011 at 1:55 pm
ShontelleSymone GOLD, New Castle, Pennsylvania
15 articles 0 photos 51 comments

View profile
this show is the worst. its so cheesey the acting sucks and it like dr, phil. ugh its like being in health class or something.  no one likes this show but little kids who are ganna get pregnet at 16
beautifuldisaster18 said...
on Jul. 17 2011 at 12:28 am
beautifuldisaster18, Arlington, Texas
0 articles 1 photo 29 comments

Favorite Quote:
Keep your feet on the ground, When your head's in the clouds.

View profile
Teenage pregnancy is a big deal nowadays and I believe the show was created to show, in someway, what it's like dealing with that. Yes, Amy may e selfish. But we're all selfish. Even when you have a baby you will still have natural selfish tendencies. They don't just go away. In the show Amy is fifteen. She doesn't know what to do. She's learning! She would be just like most teenage mothers in reality.
kirakhazelwood SILVER said...
on Jul. 14 2011 at 7:48 pm
kirakhazelwood SILVER, Keizer, Oregon
6 articles 0 photos 11 comments

Favorite Quote:
You can't lose what you never had- How To Lose A Guy In 10 Days