Amanda Tapping (Stargate) is Dr. Helen Magnus, who at 157 years old and still going strong (due to special vampire blood in her veins) collects and protects monsters. Magnus and her team - daughter Ashley, prodigy Will, and butler? bigfoot - run the Sanctuary, which is a haven for these 'monsters' who Magnus calls Abnormals.

Sanctuary is a science fiction show that is breaking new ground in graphic arts. The show is shot almost entirely against a green screen. The actors use very few physical props in their scenes which makes their performances that much more admirable. Scenery is not the show's primary focus so the sometimes easily spottable effects should not weigh on the watcher too much.

Sanctuary works as a show because it uses the viewers', actors', and graphic designers' imaginations to create a world that is entirely plausible. It's cheesy at parts (and sometimes tries too hard to be funny), but worth the watch especially given Amanda Tapping's brilliant performances. If you're only looking into Sanctuary for action be warned that the show spends a lot of time with its characters, especially in slow-moving (but very well acted at least for the former) episodes such as Requiem and Instinct.

Recommended for fans of Supernatural, Torchwood, X-files, and Painkiller Jane. 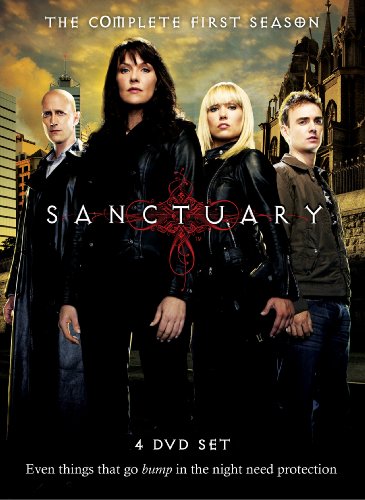 Favorite Quote:
"Just who the hell do you think we are!"