“Assassin's Creed 3” provides players with unmatched experiences ranging from fighting alongside George Washington to base jumping off a high cliff in order to take the enemy by surprise. Anyone can enjoy the feeling of fighting for their freedom alongside characters like Sam Adams.

Following the yearly release pattern for games in this series, “AC3” shows the most improvement and change in gameplay and format, standing alone in the series. The new controls give a much more fluid feel, allowing better control over your character.

“AC3” is a refreshing change from in action games. Instead of choppy graphics with distorted faces and little emotion, “Assassin's Creed 3” has graphics and sound that make you shut everything out and focus on the task at hand. The sound of a thunderstorm made me think it was actually raining. You can see every emotion on every face. The sound is like being right in the middle of a bustling colonial market, with merchants angered at British taxes. The sound and picture in “AC3” are unmatched and could only be topped by being part of the revolution itself.

The controls are easy to pick up and flow very smoothly. The games in this series always play fluently. Some sequences feel prolonged and make you wonder when they will end, but others provide constant action and easily make up for the dull parts.

This game has a way of making you come back for more. From running between volleys of musket fire to escaping an enemy platoon on horseback, the play is paced perfectly.

“Assassin's Creed 3” provides hours of side missions and optional objectives. A ­series of naval missions provides a refreshing change from the ground combat.

“AC3” exceeds the standards for this genre with stunning graphics and a compelling story. Despite some dull parts, it provides a dynamic conflict corresponding with the events of the American Revolution. I would give it a 9.5/10, since the story keeps you wanting to play, no matter how boring it gets at times, and the emotions on characters' faces make you feel like they are real. If you are looking for a top-notch action game, “Assassin's Creed 3” is for you. 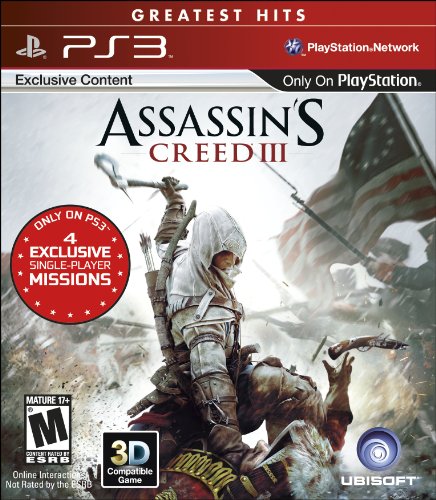 View profile
Solid review, but if I may suggest:
It's obvious that the game you're discussing is the subject of the article, and thus the repetition of "AC3" and "Assassin's Creed 3" is unnecessary. You can just refer to it as "the game."

Stick to one or the other (AC3 vs. Assassin's Creed 3) if you do choose to refer to the game in question. It helps keep the article consistent for the reader and helps the article flow a little better.
LegendKeeper DIAMOND said...
on May. 1 2014 at 1:39 pm
LegendKeeper DIAMOND, Unadilla, New York
60 articles 2 photos 48 comments