So far into the series, Bungie, the game producers of "Halo" and "Halo 2", have created their latest game that appeared on store shelves last year. The well anticipated game, "Halo 3", caught gamers to wait at stores at midnight for the very moment the game arrived. The game is loaded with more graphics, features such as forge, in which you can create your own map, and an interesting storyline that may have gamers surprised.

The year is 2552 and Humanity is still at war with the alien civilization, the Covenant. To them, Humanity is a heresy towards their religion and the alien race have occupied ring-like weapons that would destroy all life in the galaxy. These rings are a last resort for an even immense alien species that the Covenant has awoken for the second time in a thousand years, the Flood. The gamer plays as Spartan-I 17, or famously known as Master Chief, to fight off the Covenant once again and stop them from firing the rings. He is, this time, faced with the Covenant, the Flood, and the whole Halo network.

Shoot your way through pass hordes of alien adversaries to rescue mankind as well as Cortana, a sophisticated Al (artificial intelligence) who is the link to the secrets of Halo. As you traverse through elaborate landscapes, uncover clues to what Master Chief seeks to destroy the rings and end the Covenant's plan to eradicate all that lives in the galaxy. The stakes are higher and the whole human race is in the bands of one soldier. It is time that the fight had been won and the galaxy could be safe once again. 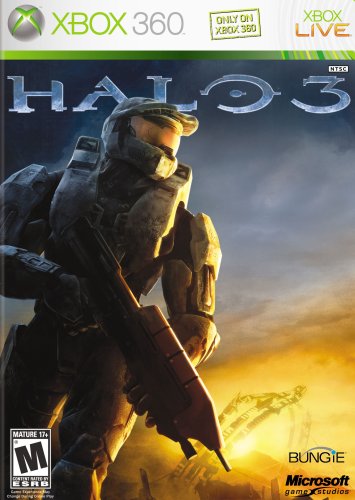 Good review, and definitely makes the game appealing to any reader, which is the intent of reviewing in the first place. And after reading this review, I think it would definitely want to make someone (familiar with the series or not) to go want to play the game.

Personally I was a little bit disappointed with Halo 3, and it stands out as my least favorite of the Halo games I've played (with the exception of ODST). It's short, Arbiter (my favorite character) gets pushed aside, and he doesn't grow much during the course of the game, and the final boss... eh, nothing too spectacular, though it felt great to finally be rid of 343 Guilty Spark. But overall it just was not as appealing to me as the other games in the series had been.

Muscleybeaver said...
on Oct. 21 2011 at 11:03 am
Halo 3 is personally the best game in the series. The campaign had me on the edge of my seat every mission. This game made me fall in love with Halo. I first played it when I was in 4th grade. I thought it was the greatest game ever. It was before I had an xbox and I was over at a friends house and I, like many other players on their first time, just wanted to play around by myself in Forge and drive the vehicles. It soon got boring, but as I grew older and finally purchased an xbox, I've really got in depth with not just Halo 3 but the whole Halo series. And as for the Halo 4 haters, don't judge 343's first release when it hasn't even came out yet!!!!!!!
pegasus BRONZE said...
on Mar. 31 2010 at 9:29 am
pegasus BRONZE, West Plains, Missouri
3 articles 0 photos 2 comments
View profile
this is one of the best games iv ever played the campaign is amazing and online play is better than i thought it would be.
EdwardP BRONZE said...
on Jan. 26 2010 at 4:42 pm
EdwardP BRONZE, Wilmington, Delaware
4 articles 0 photos 30 comments

Favorite Quote:
Did I cause your problems; Then don't tell me about them!

Favorite Quote:
"Let he that would move the world, first move himself" Socrates
"Tell me a truth and I'll listen, tell me a fact and I'll learn, but tell me a story and it will live in my heart forever." Indian Proverb

View profile
The covenant can't be a race or a civilization. The Covenant ARE a covenant. They can't be a race because they are made up of several species.
IngloriousBastard said...
on Mar. 13 2009 at 6:05 pm
This is a very good article but has some very wrong details. The covenant is not a civilization its a race. Oh and herecy is spelt wrong. The covenent never occupied wring like weapons they only explored them.
SatoUkie said...
on Mar. 13 2009 at 6:04 pm
Nice article, i have to say this is one of the few articles left worth reading. I like how you started from the begining of Halo till the start of now.

Just remember that The Covenant is a race of aliens, as of a civilization, as well as the forgotten brutes and the High Roc.But still nice article