I'm sure many of you have seen food waste: the manager at the grocery store carting out boxes of cereal past their expiration date; the employee at the Pizza Hut throwing away anything that's ten minutes “past its prime;” your friends at school dumping half their lunch into the garbage; or your mom throwing out a brown banana. This is all food waste, and it's one of the biggest problems facing America. Unfortunately, many don't realize how harmful food waste is for the environment, and how many problems it causes. America needs to take a stand and find more effective ways of dealing with it before the problem worsens.

It's a common fact that Americans buy much more food than they need. Americans only need four billion pounds of food a year to meet the requirements of every person, but in reality, we end up buying 350 billion pounds. Of that 350 billion pounds, 100 billion pounds gets thrown away. So why are 30 million Americans still going hungry on a regular basis? This is a good question, and has to do with how we deal with food waste.

Of the waste thrown away by humans, 13 percent of it is food. Of this 13 percent, or 350 million tons, 98 percent ends up in landfills. That lets off a damaging greenhouse gas called methane, which has a huge impact on climate change. If Americans cut their food waste in half, it would reduce the country's environmental impact by 25 percent. If we stopped throwing out edible food, the carbon dioxide emissions would be equal to getting one of every five cars off the road! As you can see, by throwing away all this food, instead of composting it or using it later, we are greatly damaging our planet.

Americans waste safe and edible fresh food and groceries for reasons like changed labeling regulations that render the food legally unsalable. Often, if a box of produce isn't sold right away, wholesalers would rather throw out the whole box than selectively sort through each piece by hand. Table scraps, half-eaten lunches in school cafeterias, leftovers from hotel banquets, and past-its-prime produce in supermarkets are all thrown away. Even restaurants are estimated to throw away more than 6,000 tons of food each year. Think of how many empty stomachs that could fill. Wasting food squanders the time, energy and resources used to produce it.

Now that you've learned the terrible facts about food waste, you're probably wondering, How can we stop it? Well, it's fairly simple. First, America can start composting, instead of sending food to landfills. Cities could put out recycling bins just for food waste, and the food could be made into compost or broken down for bio-gas. San Francisco has already begun doing this. By composting food we can reduce methane emissions, sell the compost to farmers, or use the food to create a renewable fuel for cars that could reduce carbon dioxide emissions by 75 to 200 percent. The nitrogen in food would make it easy to compost quickly, and would help the planet immensely.

Another solution is to serve smaller portions and plan meals better. Americans frequently take more food than they need, and throw away most of it. If Americans planned their meals, or used leftovers for future meals, it would save tons of food from becoming waste. Some restaurants, such as T.G.I. Fridays, have started cutting their portion sizes. Some college cafeterias have also been eliminating trays, meaning students have to carry their food to a table rather than load up a tray.

School lunches are also a major source of food waste; a study shows that students throw away, on average, between 10 and 35 percent of the food on their trays. There are a few ways this could be solved: schools could put out smaller portions, stop requiring elementary school students to take milk, or eliminate trays. A study also shows that in elementary schools, many students spend half of their lunch time in line, and then rush outside for recess, therefore not having enough time to eat. If students had recess before lunch, the kids would be hungrier and wouldn't waste as much. Research shows that students would waste about 30 percent less food if recess came first.

Finally, people can become aware of food rescue organizations in their communities. These do almost all the work for cafeterias and restaurants, and donate edible food to food banks – not table scraps, but prepared food that was not served. These organizations can rescue thousands of tons of food. They can also help feed the hungry. People aren't aware that over 27 percent of the food we throw away is still available for consumption, and if we saved just five percent of our food waste a day, we could feed four million people.

All these solutions can help stop food waste. We can plan our meals, start backyard composting, encourage cities to start curbside recycling pickups for food scraps, help food rescue organizations, and be more conscious about what we buy, and what we throw away. Teens all across America can help stop world hunger, and stop the damaging methane gases released from the food waste. Throwing it away isn't the answer. 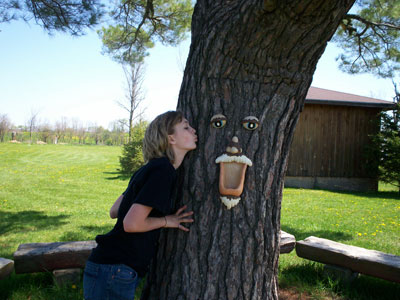 Lilliterra said...
on Sep. 26 2010 at 4:01 pm
My mom is part of a group that goes to grocery stores, and after getting their permission, routinely picks up stuff like milk past its "sell by" date, (but not the "use by" date) eggs in the same predicament, juice, several-day old pastries, yesterday's deli sandwiches, etc, and they put all that stuff to good use.
Christy PLATINUM said...
on Jul. 30 2010 at 11:42 am
Christy PLATINUM, Arden Hills, Minnesota
23 articles 18 photos 31 comments

View profile
Yah, we should do that! I already emailed the superintendant for my school district and told him to look into the food waste issue. I've talked him into sending our food waste to farms to use as livestock feed.
LenaCrash said...
on Jul. 29 2010 at 10:06 pm

This article is well researched. I'm not sure how far back this awareness to food waste goes, but these organizations that negotiate food to go to food banks are definitely worth looking into.

If some of us can do enough valid research, we can form a group of people interested in utilizing every bite of food to its fullest potential.  Youth generally generate the most publicity where it counts, no?

Favorite Quote:
"Decide you want it more than you are afraid of it."

Favorite Quote:
"My name is Ozymandias, king of kings:
Look on my works, ye Mighty, and despair!
Nothing beside remains"
-Ozymandias by Percy Shelley

View profile
You may want to check out a book that recently came out in to book stores called Waste : Uncovering the Global Food Scandal, by Tristam Stuart.
Christy PLATINUM said...
on Jan. 24 2010 at 6:55 pm
Christy PLATINUM, Arden Hills, Minnesota
23 articles 18 photos 31 comments

Favorite Quote:
"you can throw in the towel or you can use it to wipe the sweat off your face"
"no one ever drown in their own sweat"