Favorite Quote:
“Nothing is impossible, the word itself says 'I'm possible'!”—Audrey Hepburn
"What would life be if we had no courage to attempt anything?"—Vincent Van Gogh
"Failure is success if you learn from it."—Malcolm Forbes

“Nike.” Our common impression of the word “Nike” has changed from the literal Greek meaning to one defined by the iconic sports brand. In Greek, “Nike” directly translates to victory. As time progresses, modern day society believes “Nike” to only be a sports clothing brand. Yet a deeper examination and understanding of Nike Inc. can unearth a new understanding of the rich and historic word. Once “Nike” was adopted by the athletic company, its simple Greek meaning of victory developed to a swoosh that symbolizes hard work and overcoming obstacles.
Ancient Greeks’ use of “Nike” originated out of sports and running, but has been adapted to the world at large. In 490 B.C. during the Persian War, the ailing Greeks won the Battle of Marathon against the dominant Persian Empire. According to legend, the Ancient Greeks employed the runner Pheidippides, to run 26.2 miles to Athens to deliver the news of victory. Upon his arrival, Pheidippides shouted “Nike,” or victory and fell to his death. Though the Battle of Marathon happened about two thousand years ago, we still have our own “Nike’s.” Nevertheless, our “Nike’s” come in the shape of revolutionizing the field of medicine, or scoring the winning goal. A “Nike” can be on a major or insignificant magnitude of importance to the world, yet we know the challenge to reach the summit of victory.
Nike Inc. has reinvented the Greek meaning of “Nike” by capturing the hard work that goes into victory. Nike advertises by dramatically captivating the audience’s attention—displaying an athlete’s intensive and focused work out. From one glance at an ad, we can outline the drops of sweat running down their necks and see the vigor and determination in their eyes. Viewers have unknowingly associated the word “Nike” with the grueling work of victory. Nike’s expanding interpretation of the word has made society rethink what type of laborious work must go into a victory. Before Nike Inc., the common perception of “Nike” was running and sports. Now, modern day man has come to appreciate and celebrate victories, knowing that they have all been hard to achieve.
My own “Nike” took a lot of hard work and determination and it sometimes felt it was impossible. I reluctantly admit I have shed a lot of blood, sweat and tears in flute, to achieve my goals of becoming first chair. As I played my gleaming flute for the first, my hands fluidly and artistically pressed down the delicate keys. Playing flute developed my competitive nature and always drove me to be the best. I dedicated my time to receiving first chair—a chair reserved for the best player in the band. I would play flute until my lungs were out of oxygen and my fingers could no longer move. My back was always stiff and I would get dizzy after playing for hours. The music would torture me; the notes and rhythms seemed to dance in endless circles of aggravation. Nevertheless, I still received first chair. From my own experience, I have learned about how much effort goes into this simplistic word.
The ideas of “Nike” have even been adapted to our culture on a larger level. Even Oprah Winfrey had to overcome vast barriers in order to become the most inspirational talk show host. She is a household name and is an ideal model of “Nike.” Winfrey was born to two impoverished teenage parents in rural Mississippi. She grew up with her penniless Grandmother, as a result of her parents splitting up. As Winfrey grew older, she decided to live with her mother, where her male relatives molested her. In order to cope, Winfrey turned to alcohol, drugs, and sex. Only at age fourteen, she gave birth to a premature baby who died after birth. In a quest for balance, Winfrey moved to Nashville with her father and obtained a job as a local television reporter. From there, Winfrey’s career flourished and her talk show is now the most watched show on television. Though Oprah Winfrey’s upbringing was not conventional, she was still able to vanquish all barriers in her way. Winfrey should be living proof that “Nike” is possible, yet it takes a lot of tenacity and persistence.
“Nike” embodies winning the onerous upward battle that one must fight to victory. From the ancient Greeks to modern day society, our interpretation of “Nike” has developed complexity by implying the hard work that it takes to victory. No matter what scale a “Nike” is on, it takes perseverance to reach the apex. In the world today, we want things done fast and effortlessly. Some of us take diet pills to make us skinny and bully to mask our own insecurities. Others beat their wives to let out anger and do drugs to forget their abominable situation. Our world wants instant cures to difficulties. But we must travel down the more rigorous and righteous path, instead of going down the facile and dark path. Therefore, reaching our “Nike” only happens with the overcoming of obstacles. 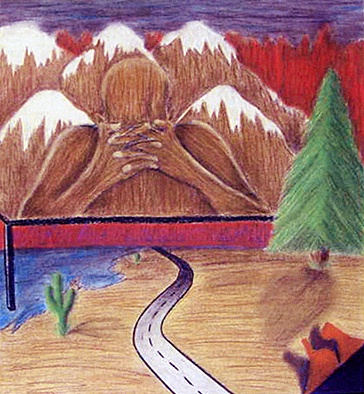 The author's comments:
I attended Phillips Academy Andover Summer Session for 5 weeks over the summer. Being in an environment with extremely dedicated students made me realize how much commitment I need to put into everything I do— I can't expect winning or accomplishing goals without hard work. My experience over the summer at Phillips Academy Andover completely shined a light on how we can't get off easy in life and need to work to accomplish things.
Post a comment
Submit your own