If someone were to ask, “What was the most revolutionary invention in art history?” What are the first things to come to mind? Is it the creation of oil paint that made immaculate details in painting possible? Is it the invention of concrete in ancient Roman architecture that made the famous Pantheon dome structure possible? Or is it the invention of daguerreotypes that gave birth to an entirely new art form called photography? These are all significant instances of innovation in history, but did you know that we are currently living in one of these moments? We are witnessing the emergence of a distinctive art form that is unlike any other in history, and it is made possible by a seamless merge between art and computer science technology.

TeamLab – from the museum to the bathhouse

In the summer of 2018, a museum called TeamLab Borderless was opened to the public in Tokyo, Japan, showcasing artworks by the renowned media artists group teamLab. TeamLab Borderless is not your typical art museum – it has 520 computers and 470 projectors working simultaneously in real-time to display the everchanging artworks. In fact, this unique art form is characteristic of teamLab’s works, which creates immersive and interactive spaces for viewers to appreciate the visual wonders constructed by computer programs. One of the key features of their artworks is that the displayed visual forms are constantly changing in response to the viewers' activities so that the appearance of the artwork at any moment is unique to that point in time. These ever-evolving artworks are thus producing exclusive art-viewing experiences for individuals, which is made possible by the use of strong data-processing computers at the site.

TeamLab’s latest work is located in a conceptual sauna house, where the alternating hot and cold baths place visitors in a meditative sauna trance, a neurological state where their five senses are heightened, and they become fully immersed in the surrounding light displays. These lights are controlled by interactive computer programs that change the display based on the actions of the visitor. The artwork hence draws the visitors’ attention to their existence in relation to their surroundings by incorporating these programs.

TeamLab’s interactive installation art has a wide range of possibilities and can also be viewed in relation to real-life settings, such as a bathhouse. In 2019, teamLab showcased their work in an abandoned bathhouse, where they installed illuminated cuboids as a part of the settings. These glowing “megaliths” seem to emerge from the bathhouse floor, and their surfaces are made of LED screens, where the visual contents are generated and controlled by servers at the site according to the viewers’ actions.

D'strict – a realistic yet surreal world

Among most of teamLab’s computer program-based interactive installations, the visual forms displayed onscreen are completely generated by the computers in real-time. This image-creating technique is strongly dependent on the processing capabilities of the on-site servers and the level of advancement of the technology that supports the computer hardware. Not to mention, since computers need to constantly generate high-resolution images, their stability also becomes a point of concern. All of these factors pose limits to artworks that rely greatly on real-time computations.

Fortunately, interactive installation art can continue to develop in creative directions as computer programmers discover ways to cope with computing limitations. For instance, D’strict is regarded as one of the leading artists groups whose works combine real-time computations with off-line rendered animations. Through utilizing this combined strategy, their installations are able to present astonishing details and realistic physical movements despite computing limitations.

D’strict creates spectacular images by reshaping visual impressions of natural elements such as ocean waves and polar lights. Viewers are presented with realistic yet other-worldly experiences of observing the water, waves, or scenery of the countryside. The astonishing part is that these detailed and realistic images are not videos from lens-based photography but are generated by computers. Though, unlike the fully real-time rendered visuals by teamLab, the displays created by D’strict artists are pre-rendered footages that are programmed to play or pause based on the viewers' actions on site accordingly.

The world of computer programming is constantly evolving with the development of new technology; the invention of the Graphics Library Shading Language (GLSL) is made possible by improvements on the Graphics Processing Unit (GPU), and the visual programming software Touchdesigner was developed using the programming language Python, which is the result of improvements in programming environments. The advancements in computer science are what made these amazing media art pieces possible. Visual programming software and programming language such as GLSL have bridged the minds of artists and computer scientists in collaboration to produce this modern art form.

It would be hard not to mention computer games when discussing the collaboration between artists and computer scientists. The Computer Generated Image (CGI) technology and aesthetics were first developed in the gaming industry and have tremendously influenced media art today. Gaming engines, being the containers and the renderers of the 3D models, are now becoming more and more irreplaceable in the creation of CG images or animations. Thus, the use of the gaming engine in art pieces does not come off as a surprise.

The field of computer science itself is also influenced by the in-depth use of agile graphic processing in art – the artistic and creative use of GPU programming has stimulated the development of graphics hardware, and the technology is now being applied to other areas such as autonomous driving and AI recognition.

Rethinking the future of art

These computer-aided artworks are revolutionizing our understanding of art and introducing possibilities that have never been seen in the history of art, for instance, the uniquely ephemeral and interactive nature of contemporary artworks from Teamlab. The involvement of technology does not diminish creativity; on the contrary, it vastly expands the grounds on which our creativity roams, allowing for more freedom in artistic expression. As advancements are achieved in computer science, the new possibilities that technology offers artists become increasingly unbounded. One thing is for sure – computer technology is the future of a more innovative and bewildering world of art.

Here's What We Know About NVIDIA's Autonomous Driving System

Introduction to GLSL and fragment/pixelshaders 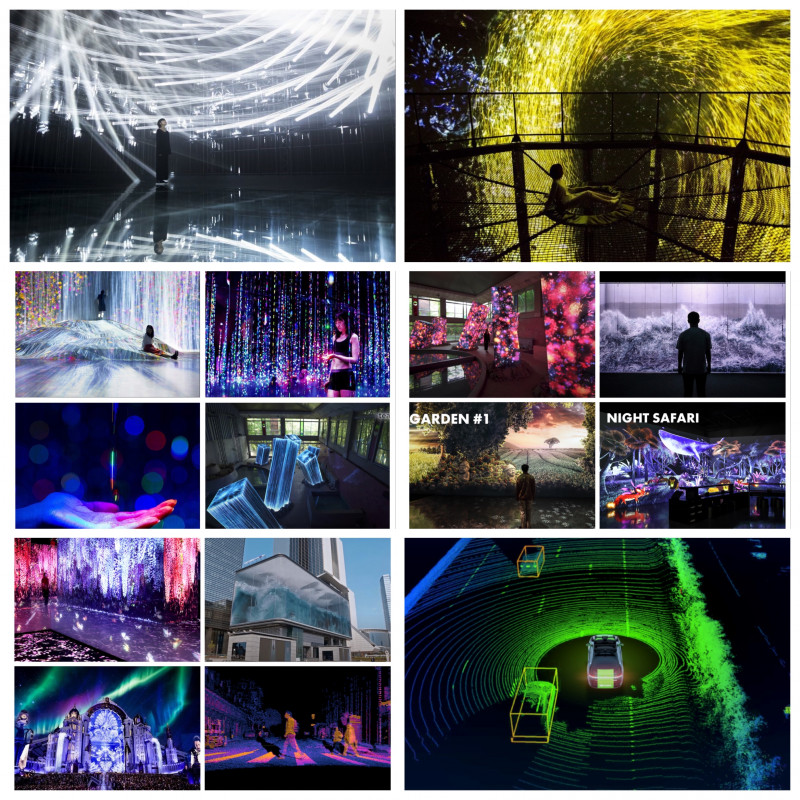 My name is Garbo, I am currently a senior in a US high school. The importance of STEM and art in my life had inspired me to share their connection with those around me in my articles. I hope to promote interest in STEM and art, giving insights into the fascinating world of STEM as well as appreciation towards the beauty of the art world, and, more importantly, bringing that fascination and beauty into each and every one of our own little worlds.