The Difference Between Being Defeated and Being Destroyed | Teen Ink

The Difference Between Being Defeated and Being Destroyed

In Ernest Hemingway’s The Old Man and the Sea, a running theme throughout the book is that man can be destroyed but not defeated. The Old Man and the Sea is a story about Santiago, an old seemingly unlucky fisherman, and his battle with an eighteen foot marlin while being stranded in the Gulf Stream for three days. During those three days at sea, Santiago could have very easily given up when he was defeated at sea, but he did not, therefore he was defeated, but not destroyed. By never giving up during his time spent at sea with the fish, Santiago shows how you can be defeated but not destroyed.


Santiago could have given up on his first day at sea when daylight came and went and he had only hooked the fish. Before hooking the marlin Santiago caught a 10lbs tuna, and he could have been happy enough with the tuna since he had finally caught a fish after a dry spell of 84 days, but he persisted on and later hooked the marlin. The marlin also starts to pull Santiago farther and farther away from Havana, but Santiago did not unhook the great marlin and give up on him. The fish, to an extent, has defeated Santiago already since he could not catch the marlin and since the marlin has control of where the skiff is going. Towards the end of Santiago’s first day at sea, he starts to pity the fish; “Then he began to pity the great fish that he had hooked. He is wonderful and strange and who knows how old he is, he thought” (48). At the end of Santiago’s first day at sea, he is determined not to give up or to be defeated by the marlin.


On his second day at sea, Santiago is now injured because of the marlin, but is still not defeated by the great fish. “He felt the line carefully with his right hand and noticed his hand was bleeding” (55-56); when the marlin had jerked unwater, he had pulled the old man forward and the fishing line had sliced Santiago’s right hand. Weakness can be a sign of defeat, and since Santiago’s right hand is weak and injured because of the fish’s strength, Santiago was then defeated by the marlin’s strength. By the end of Santiago’s second day at sea, his hand is injured but he still persists on and does not give up on himself or on the fish; showing how one can be destroyed, but not defeated.


Santiago spends a third and final day at sea with the great marlin; a day that starts out successful, but ends with defeat. Santiago finally kills the great marlin, “Then the fish came alive, with his death in him, and rose high out of the water showing all his great length and width and all his power and his beauty” (94). Santiago had finally defeated the fish, but he was not done being defeated by the sea and who live there. On his way back to the shores of Havana, the great marlin Santiago caught was bleeding and the smell of the blood had attracted sharks, so therefore, the marlin was ripped apart so only its head and bones were left. After battling off the sharks, Santiago makes his way home; defeated, but not destroyed.


Santiago was defeated during his time spent at sea with the fish, but he was not destroyed, which shows how by never giving up you can only be defeated, not destroyed. From being pulled far into the Gulf Stream, or from his hands getting cut by the lines being pulled by the marlin, or losing his prize marlin to a pack of sharks, Santiago never gave up hope on himself or the marlin, even though he was defeated. Santiago was defeated many times throughout the course of The Old Man and the Sea, but his never ending hope kept him from being destroyed. 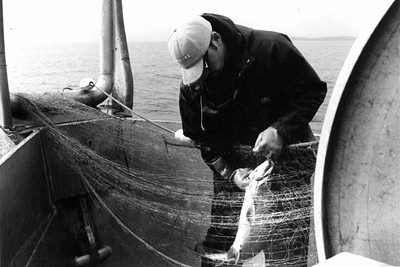