Malcolm’s parents had a huge impact on his life. His father, a preacher, was killed by the Ku Klux Klan for “disrupting the good negroes.” His mother was cheated out of the insurance money and went “crazy” trying to keep food on the table and the state from taking her children. As a child, Malcolm had great oratory skills, screaming until he got his way. He was a hustler, a thief, and a cheater. As a result, he was sent from home to home as a foster child. Caught up in the world of drugs and stealing, he was imprisoned. But in prison he reformed, which is the point. He converted to Islam, leaving the white man’s ways behind bars.

Released from prison, he became active in the Nation of Islam, a black separatist group, and became a follower of Elijah Muhammad, its leader. Most of all he was an adherent to Allah. While on the Hajj, a pilgrimage to Mecca, he saw Muslims of all races celebrating Allah. This experience changed his views.

He was an orator who could make people hear, taste, see, and feel his words radiating into a room. In a revolution, he knew it would be hard to gain followers without bloodshed.

Most of Malcolm X’s views collided with those of Martin Luther King Jr. While King’s philosophy was “turn the other cheek,” Malcolm’s was “by any means necessary.” He believed that if something is important to you, you should take it, no matter what. Malcolm X’s ideas are often misunderstood. On February 21, 1965, Malcolm X was assassinated by feuding members of the Nation of Islam in Harlem, New York.

Just last week I read The Autobiography of Malcolm X, which changed my outlook on life – not to a bad view, just a different one. Malcolm X is an unconventional hero for a teenager; as a matter of fact, not many teens even know who he is. The X in his name represents the unknown, his lost heritage; for me it symbolizes the integrity he showed, the courage he passed on, and the leadership that followed. 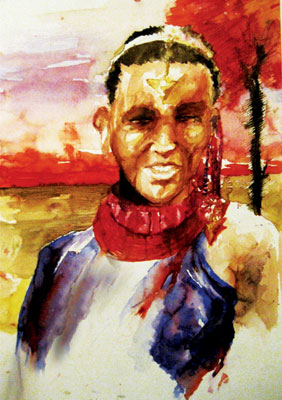 Teen Writer said...
on Oct. 5 2011 at 6:02 am
Malcolm X is quite a hero to a lot of us. He was definitely not a bad person and believed in equality. He hated how the black people of the society were looked down upon. His thoughts were just like those of Martin Luther. And if he were still alive today, he would have been defending the muslim nation against all criticism just like he supported his community back then.
blackveilbrideschickies BRONZE said...
on May. 4 2011 at 5:16 pm
blackveilbrideschickies BRONZE, Brackenridge, Pennsylvania
2 articles 0 photos 30 comments
View profile
Love this...We are currently studying him in school now:)
Mr.FDR2U said...
on May. 4 2011 at 1:39 am
Sorry my comment was in response to "refer"
Mr.FDRII2U said...
on May. 4 2011 at 1:35 am

i feel as if i must speak because i am a huge fan of mr. shabazz. if you look at the reasoon he was  killed it was not for the reason(supremacy) as stated before. i will not state the reason in hopes you will look up the TRUE reason he was killed.

But I must say sir you captured each and every emotion i had about Mr. Shabazz. Your writing is a gift, please continue to bless the world with your words.

Favorite Quote:
Chase the dream not the competition

Favorite Quote:
"I can do all things through Christ who strengthens me."

Great summary! Check mine out, it's about Malcolm X as well, and it goes a bit more in depth.

HI FIVE
Precious BRONZE said...
on Mar. 31 2009 at 8:26 pm
Precious BRONZE, Troy, Michigan
3 articles 0 photos 30 comments
View profile
After reading this I think I'll read his biography. I think Malcolm X is a great hero. I just got my first piece published. Please check it out. Some nice criticism would be nice.