What is your title today? What was it ten years ago? What will it be ten years from now? During the course of one’s life, a person can expect to change his or her title often. Usually, the change is not too drastic. When someone is born, they are a child, infant, a son or a daughter. A person grows and becomes a child, a student, a friend. Even later, this child becomes a graduate, a spouse, a parent. Someone changes, God willing, from a child to an adult gradually, with many stops in between.

I was twelve when I became more than what I had been. I ran down a road not many even find on their way through life. I became an author.

I had hated writing, loathed it with every fiber of my being. I loved reading, though. I was a reader. It was what I did, the reason I lived. It was my title. I could not stop.

That is, until one day when I went over to a sleepover at my friend’s house. After a few minutes, we were in her room, already bored after a long day at school together. Marilyn took out a notebook filled with her handwriting.

“What are you doing?” I asked her.

“I’m writing a story. You should try it. It’s fun.” She suggested innocently. I believed her. After all, my best friend would never lie to me. That was all it took.

Soon after the pen hit the paper in my first fiction, I was hooked. I could not—can not-- stop. My first story was seventy-eight pages and remains enshrined in my bedroom, a beautiful silver-gray notebook embossed with flowers on my dresser. It took exactly one month to write.

Now, my manuscripts often surpass the length of two hundred pages and span for months before I even contemplate ending them. I’ve grown as a writer, and I have enjoyed the journey.

I have poems as dark and convoluted as a thundercloud, painful and untamed as an electric discharge. I pen lighthearted comedies with bellies full of laughter. Blood-ridden dramas mesh with passionate and dangerous romances. Tales of forbidden longings and betrayal bend around lives that twist terribly towards sin and purity. My epics always end with beautifully tragic scenes that flash on my screen and spill across my paper.

I am an author. The world is mine. 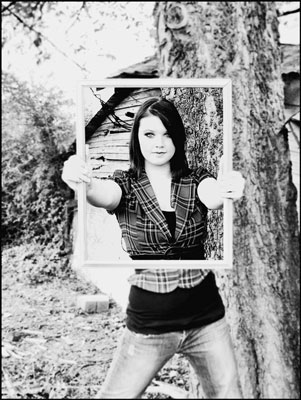 The author's comments:
I seriously never liked to write, bu tnow it is my life. This was for my English teacher, though, so the edits had to be drastic.
Post a comment
Submit your own

Favorite Quote:
Yea, though I walk through the valley of the shadow of death, I will fear no evil, for thou art with me; thy rod and thy staff they comfort me. Psalms 23:4

View profile
ha! and I'm the one who started it all!! lol luv ya, buddy! :P