My Rocky Relationship With Ribbons

Favorite Quote:
"My gelding was sold to me as a gentlemen. He is. Whenever we go over a fence, he insists on ladies first."
-Unknown

The cold night air bit into my face and prickled my arms. I rubbed my hands up and down my upper arms, trying to create some friction. It didn’t help.

“I told you to wear your jacket. But do you ever listen to me? No.” My mother chastised. She had seen my teeth chattering. I simply rolled my eyes. We all hurried across a dark downtown street. Which street? I didn’t know. Streets have always been a foreign language to me.

My father was a few paces in front of my mother, sister, and I. His steps were much larger than ours and we scuttled behind him in our high heels. My black dress pants caught on my heels every few steps and a sudden winter wind slid under my draped top. I shivered a little more, mirroring my little sister. Who had ignored my mother’s requests to put on a jacket or wrap as well.

“And you, I specifically told you that you would be freezing. And did you listen? Of course not.” She had seen my sister cave in on herself, trying to block the wind.

“Mom, I told you. No one wears a coat with a dress like this. And stockings with these shoes would have meant social suicide.” Always the drama queen. The reason my jacket was at home was because the not so subtle smell of the barn clung to the fabric. And tonight I wanted to look and smell nice. Just one night.

The automatic doors to the US Bank building slid out of the way. The lobby was empty, free of horse people attending the same awards dinner as us. We were late. No shock there. We were always late. Our heels and my dad’s dress shoes clicked and clacked across the marble floor bouncing off the art covered walls. A tired looking woman stepped off the elevator clearing the way for us. My father hit the fourteenth button. The top floor.

Once the doors opened we were flooded with the raised voices trying to speak above their neighbor’s and the easy laughter of old friends. We were all friends here. Now that the competitions were over, the horses safe in their stalls, helmets and show coats put away until next season, we were all friends. The people I saw at every horse show in riding breeches, hair tucked under their helmets, and dirt smeared across their brows were polished tonight. Every woman and girl had on a dress and heels, every man and boy in a coat and tie.

My family and I wove through the crowd looking for our table. Quail Run. Nope. Elkhorn Equestrian Center. No way. Glenn Carry. No. Ah, Hills Farm. Sitting at the table were the people I saw everyday in jeans, baggy sweat shirts, manure packed into the crevices of their paddock boots, and god knows what crammed under their finger nails. Tonight however, the all looked spectacular. The younger girls, just a few years younger than myself, resembled my younger sister. Stylish, almost painfully. The adults that I had come to know, CeCe and Ann were put together nicely as well. And dear lord, my trainer, Jack Mosely was in a suit and tie. Something I thought I’d never see. I mean he was the guy who patched his jeans with spare fabric and fixed his boots with duct tape.

Everyone at our table got up when they saw us arrive. Excited squeals and hurried, ‘you look great!’s were tossed around as everyone hugged everyone hello. When I hugged Jack, I caught sight of a moth hole on his collar. I smiled to myself.

“Alright. Alright. Everyone quiet down and take your seats.” Called a woman with a microphone. Heads turned and people began to sit down. The conversations didn’t cut off, but they did quiet down some. “In a few moments everyone will be called over get some food. Alphabetically of course.” The kids and adults alike at Quail Run’s table groaned. “Then once everyone is seated we will begin with the awards.” We were called fourth and gladly made our way over to the buffet. My family and myself being the vegetarians we are found only lettuce and overly seasoned potatoes to our liking. I pushed my food around and listened with a small smile to the familiar bitter sarcasm that was being thrown around the table. The jokes didn’t stop once the award ceremony began. Ribbons were handed out as cameras flashed. Ribbons. That was it. Every rider there worked their butts off all year for what? A ribbon. Maybe I was being a cynic because I knew I wouldn’t get one.

My journey to this table was the hardest one I had ever taken. My horse Zephyr was not one of the well behaved, schooled ponies a lot of the other riders there were blessed to own. Mine was what horse people called green. In other words he knew basically nothing and was afraid of just about everything. Including his shadow. You can imagine the types of problems we ran into on a daily basis.

But I loved him and riding more than anything. I knew that together we could do great things and go far. Even if no one else thought so. Seven days a week you could find me on his back, gritting my teeth and working for every stride. Bloody hands were common, exhaustion became my middle name, and blisters became as permanent as my freckles. I had spent evenings sitting on my bathroom floor letting tears drip down my face and crash into the already slick tile while I told myself over and over what a failure I was. And those around me shook their heads and sighed. She’s chasing a dream. They whispered. What you’re going for is just impossible. There’s no way that you and that horse are ever going to go anywhere. They said to my face. That year had been harder than anyone will ever know.

I had gone to every show though. Wether the last had been good or bad, I showed up with Zephyr and gave it my all. And what had become of all my hard work? Second place. Every time, second place. Always second, never first. No matter how hard I worked, I was never good enough. So why was I even there that night? To wish my fellow riders good luck and hold their other ribbons as they went up to accept another. Ribbons. That’s all they were.

The candles had dripped puddles of wax on the table clothes, the little children were yawning, and empty glasses crowded the adults’ places at the different tables.

“Ok, now for the last category. The jumpers.” The announcer took hold of the last box containing four ribbons. A white, yellow, red, and a blue. The envy of all the jumpers. I sat back in my chair, hands together. “Forth place goes to Paige Thomas riding Callie.” A young girl I used to know very well hopped out of her chair and ran up to grab her ribbon. Applause erupted through the crowd, most of it concentrated at Elkhorn Equestrian’s table.

“Third place goes to Chloe Han riding Jack.” Chloe strutted up on stage and took her ribbon proudly. Though her eyes lingered on the blue ribbon a moment longer than necessary. Everyone at our table clapped quickly. Cameras flashed.

“Second place goes to Tyler Danielson riding Galaxy.” I clapped as a boy a year or two younger than I walked up to grab his ribbon. The harsh lights of the stage glittered off the red ribbon in his hands. The applause continued, the hoots and hollers just switched back to Elkhorn’s table.

“And first place goes to Lillie S. riding Zephyr.” The applause in the room quieted and I looked up in surprise. It wasn’t possible, was it? Everyone else in the room echoed my thoughts. I rose slowly out of my chair and a single pair of hands came together in approval. Jack’s.

And with that, it was like a dam busted apart. People clapped louder than before, hoots and hollers escaped the lips of not only the Hills riders, but the riders from Elkhorn and Quail, and of all the other friends I had met along the way. I took my blue ribbon with shaking hands and waited on the stage for a moment letting my mother take a picture. As the flash split through my vision I thought, This is for all of those who never thought I could do it. With that I raised my ribbon above my head and started the long walk back to my table. A blue ribbon in one hand and in the other, a blue halter that had the word champion stitched on the nose band. My ears still burned with the cheers as I hugged Ann, CeCe, my parents and other Ponca people. Then I walked over to Jack. He clapped me on the back and said,

“Way to show ‘em kid.” Pride rang through his voice. I had shown everyone that impossible is only a word for the lazy and cowardly. 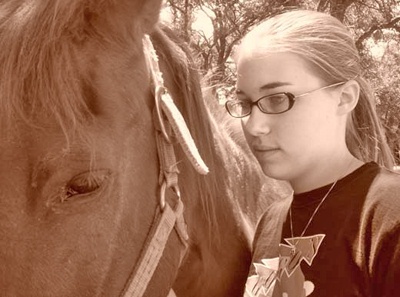 3Rdman said...
on Mar. 12 2015 at 3:15 am
Interesting story. I knew Jack as a kid and rode with him in Santa Barbara. If you talk to him ask him to contact Phil H in Santa Barbara. Reconnecting could be interesting as I'm dabbling in the horse world/hobby business(?) and I saw a YouTube of Jack that really impressed me. Thanks... 3rdman
Carlie BRONZE said...
on Mar. 21 2011 at 8:36 pm
Carlie BRONZE, Omaha, Nebraska
4 articles 15 photos 68 comments
View profile
I loved the description in this article. My favorite part was you talking about your fashion forward sister!!!