It was my first poem contest ever. I was extremely nervous. The butterflies in my tummy fluttered, as if they did not know the level of nervousness that had already overcome my body, like a wave in the ocean overtakes the shore.

I walked into my audition room. The judges sat at this ancient wooden desk with one leg about an inch too short. The names of past students were engraved on it, forever reminding the world of them. I stepped up to my rickety, cold metal podium. As I clasped my clammy, rosy palms, the nausea set in. I could do it. I opened my mouth and let my natural love for poetry show, through my voice. The words for "Para Salir" flowed from my mouth as water from the Niagra Falls. This was exactly what I was meant for. Poetry. My passion. I blinked, and the audition was finished.

I ambled outside, ambivalent as to what I was to do next. Making my decision, I made my way to the Taco Bell across the street. I wasn't hungry, definitely not, nerves were still high. Although it was true, I still needed to drown the butterflies with something. As I was waiting in line, I noticed my school's Latin teacher, waiting in front of me. I tried to remember her name. Jane? Jenna? As I flipped through the pages of my brain, trying to find where her name was registered, the guy next to me whispered "J-Hump" to her, obviously trying to annoy her. I sneaked a quick glance at him, attempting to figure out if I knew him or not. I didn't know him. I would definitely have recognized him if I had known him. I did not know why. There was something distinct in his facial features. He looked to be about twenty, but he had the voice of a fifteen year old. The inner-extrovert in me tried to bury the curiosity that would no doubt burn until I made my acquaintance known to stranger. There was no hope, I would have to talk.

"Hello..." I whispered, barely audible.
"Hey! Ummm... Do I know you?" The stranger replied back, a goofy, lopsided grin on his face.
"No, you don't; I just wanted to know if you thought that it was rude to talk to that woman like that."
"Actually, she's my Latin teacher and my mom's best friend. That's what I call her all the time. I'm sorry if I appeared rude. I was not trying to be, miss." He explained quickly.

As I sifted through the jumbled pile of thoughts in my mind, he introduced himself to me. Being polite, I introduced myself to him, even though I was shaking inside. The more I looked at him, the more obvious it was that he was a god subjected to live on earth. His face was perfect. He acted goofy. From the sound of his voice, he was intelligent. His eyes were the blue of a crystal lagoon. He was beautiful.
"So where do you go to school?" He asked.
"I uh.... go to that fine arts school... you know which one I'm talking about?" I managed to stammer back to him.
"Oh! I go there too!" He replied excitedly.

The teacher in front of us had exited the restaurant and we were next in line.
"Ladies, first." He said, grinning.
I walked up to the register, handed the cashier a crumbled five-dollar bill and asked for a Mountain Dew. He asked for the same. We grabbed our cups and filled them with that magical, green liquid. We walked together, smiling and laughing, as we stepped out into the bitter, harsh winter air. He smiled at me, as he said, "Well, I have to go." He hugged me and walked off.

As the afternoon continued on, I thought about him more and more. I didn't like him, but I definitely wanted to keep knowing him. We talked while we were together. He learned about me, but stayed mysterious, in my eyes.

The next day, I had lost hope of ever talking to him again, knowing that he would not know me from Eve in the midst of every single beautiful high school girl in our school. I walked into my homeroom, preparing for another day of hell, in the social environment known as school, and sitting on my desk was a Mountain Dew, with my name on it. A tear streamed down my face, as I grabbed it. As my fingers touched the cool surface of the cup, I saw a hand-drawn butterfly on the lid. I quickly sat in my seat, folded my hands together, and prayed to God and thanked him for sending me this perfect angel.

One year later, I glanced at him and everything changed. I knew that I was crushing on him. I couldn't do that to our friendship, but I did anyway. Through three months of torture, I suppressed my feelings for my best friend. Then, one day, in Math class, I saw a note on the desk in his scribbled manuscript. It was addressed to an MM. Unknowingly, I opened it.
"Dear M,
I like you. :) Will you go out with me?"
That is all that was written on there.
Overreacting, I scribbled a note on a piece of paper that said I would kill myself because of him and shoved it in my backpack. Two days later, he found it on the ground and read it. He gently put it in his pocket and never looked back. Apparently, I was dead to him after that note. For 17 days, he ignored all of my texts. For 17 days, he ignored my desperate pleas for forgiveness. For 17 days, he ignored me, and for 17 days, I cried myself to sleep and plead to God to kill me.

On day 18, he received another text from me, but everything had changed. He remembered the butterfly. Soon, I received a phone call from him, explaining that he needed to see me soon. We met up at a Taco Bell. At the table in the corner, there was a Mountain Dew, sitting on the table, and the little faithful butterfly was still drawn on the lid. Right beside it, was my best friend.

It has been two years since the incident. We are still best friends. We still drink Mountain Dew. We still draw butterflies. Things have changed. He has a girlfriend now. I don't mind this time around, knowing that things would be worse if I reacted badly. Things may have changed, but we are still the same, and so is that little faithful butterfly. 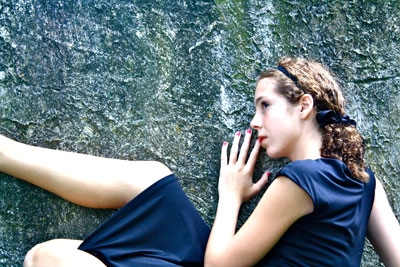 The author's comments:
This is the story of how I met my best friend for life. The reason I exist. I just want people to know that it is possible to have a best friend and to never give up, even when they think that there is no light at the end of the tunnel.
Post a comment
Submit your own

AlexThomlinson said...
on Dec. 5 2011 at 9:42 pm
You are such a good writer KCmariposa! Itll give you a very successful future. In a few years, maggie and I will be seeing you with your Pulitzer prize award! :)
MaggieMae said...
on Nov. 30 2011 at 5:38 pm
This is heart-wrenching. KCmariposa, I'm glad you met your best friend. I almost lost my best friend and this just showed me to keep believing. Keep writing. Your writing is great!