It's Hard to Be Me

Eleanor, with the perfectly flattened, no frizz, clipped back hair, stood up to address the class. I ran my hand across the top of my hair, being ever so careful to put just enough pressure to detect the rebels, but not too hard, or I would provoke an attack. Next, putting all four fingers together, I swept the length of my forehead, triple checking that the territory was all clear of trespassing baby hairs. Smooth, smooth, smooth… the tip of my ring finger lagged behind by a fraction of a second, detoured by….a hill?! At my cry the rest of my fingers rushed to the crime scene, double checking, triple checking, quadruple checking, that Mount Everest had indeed grown on my skin. The crime, the zit had stolen the little chance I had at being beautiful.

Staring at my Uggs, I walked through the hallway. When my friends greeted me, I glanced up with the edge of my peripheral vision to see who was waving. “Hi”, I would say hurriedly, not making eye contact. I would not embarrass them by being seen with the girl with Mount Everest on her forehead. One of those kids that the first thing you did when you saw her acne was cringe and wonder if she smelled bad too. When the Rocky Mountains went away, then, only then, would I lift my head. I would pass off my withdrawal as being due to some sickness. Maybe a long term migraine, yeah, that would work. And if I was lucky, if God loved me, nobody would know this ever happened. I passed the time with my feet, the pages of the textbooks, the stained surface of the lunch table; all the while occupying myself by summing up all of my knowledge on break outs. If I popped it tonight, I’m pretty sure that it would take like 8-16 days to heal. I reached down to grab my agenda. Shoot! My face burned hot red as I worried that Chris had seen my zit in the carelessness of my scurry. The heat began to subside though as I continued to flood myself with my thought process. So if today is March 15th then that would mean by March 23rd, it could potentially be gone. Or March 29th! Burning.

Left foot, right foot, left foot. In my peripheral vision, I saw a cute boy. My face flashed red again, but this time in anger as I stormed over all of the hours I had wasted in front of the mirror- picking out my clothes, doing my hair, perfecting my appearance. And for what?! Stupid zit had ruined everything! Now, any boy who thought to look at me would just look past my clothes and my hair. No, he wouldn’t even see them! All he would see is… my face scrunched up so that the outline of my $150 shoes blurred in my vision.

All day I had resisted the urge to duck into a girl’s bathroom and take a good look at the terrorist for myself. It was not worth appearing vain - the ugly girl that must think she’s pretty cuz she can’t stop looking at herself - no way! So, when I got home, I headed straight for the bathroom mirror. Visualizing a red mound of pussing goo planted squarely in the center of my forehead, probably surrounded by a rash of irritated skin too, I forced myself to take a look at the enemy I’d be fighting for the next month and a half - my plague from hell. I stepped through the doorway, and saw a girl with neatly combed back blond hair. And, under that hair, was a dot, that could have been a freckle if it did not have a pink tinge and a slight raise to it. And under that dot, was a smile broader than Mount Everest. 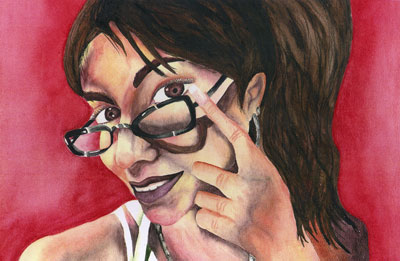