I would love to let your imagination run wild with that statement, but the truth is, I only went to watch my older cousin Morgan sing (she just joined a band, who got a gig at this English pub in downtown Sac). So my sister, Riley, and my parents were there.

Now re-paint that glamorous picture in your head. I had french-fries and water, not some brightly colored alcoholic beverage with a pink umbrella and sugared rim.

Still, being there made me imagine a future where I might go on a first date with some guy at a place like that.

The tables were old, chipped wood, and the walls were brick—adorned with odd English art. Toucans balancing beer mugs on their beaks. Pop art of John Lennon and Winston Churchill. Stuff like that. There was a large Christmas tree placed in the corner of the room, and lights were strung around the edge of the bar. The live band (starring my Cousin) was just loud enough to make couples lean in close to hear each other talk.
A girl with wavy black hair and a round face laughs at something the man across from her says and moves even closer, reaching around his head and neck, pulling him in for a kiss.

My eyes dart away. I think, “get a room” and then chuckle at my own inside joke. A couple next to us clinked their beer glasses together. The man was muscular with short amber hair and green eyes. He was wearing jeans and a plain white t-shirt, despite the cold night. The girl was black stilettos, bold mascara, silky straight black hair, and large hoop earrings. An hour later, they stood up to leave. I wonder if he is going to get some tonight.

Everyone drinks. Everyone is young, but to me appear mature and independent.

Which one doesn’t belong???

It’s the uncomfortable 16-year-old with the 14-year-old face and complexion who feels thrust into a possible but wildly premature future.

Dark hair with dangling earrings puts her elbow on the table gracefully, resting her hands on her fists. I try. There’s no one to stare back at me from across the table, so I shift back to my school-girl, legs crossed and arms folded position. A single man sits sideways in his chair, one arm over the chair’s back and the other tracing the rim of his beer glass. I try it with my water, but it feels too manly.

I give up, slouching a little and resting my head sideways on the palm of my right hand. It feels natural, but looks childish.

My mind wanders. I am thinking about that date in the future now. I realize how horribly enticing it is to me—the idea of being in my twenties, single and “ready to mingle.” I wonder if that’s how it is in the “real world.”

I quote it here because I connote it that way in my mind. I am sarcastic about everything, and I know it must drive my parents crazy because it drives me crazy. I can’t help it though. Sarcasm is an important part of my wall, my mental shield against insecurities. It’s integral, really. Sarcasm, humor, sugar-coated denial; all vital tools to the art of pushing away biting realism.
The scene in the bar looks glamorous to me, and I am filled with a naïve hope that I only half-trusted at its inception: Perhaps the “real world” has perks I hadn’t thought of before.

But here’s the thing.

Even if jeans-and-white-tee does get some tonight, and even if it is the greatest experience of his life, and the girl’s, there is going to be a morning after. Hangover for him, walk-of-shame for the girl. 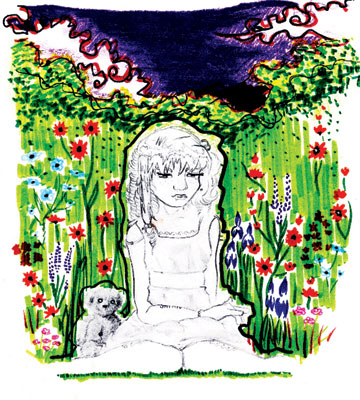 The author's comments:
When I really am 21, I will be the designated driver that gets virgin piña coladas and tells everyone what kind of drunk they are the next day.
I can't wait.
Post a comment
Submit your own