A few days ago I had a very awkward conversation with my sister. After I had the conversation I decided that it would be a perfect one to write about for my seventh journal entry which was about a conversation in which we were assertive despite wanting to “fight” or “flight.”

Here is what happened… I was sitting on the living room couch doing homework on my laptop. My friend Chris was over. He was basically lying down on the couch and I was sitting at the very end of it doing homework. I told him it didn’t bother me that he was laying down, especially since we were watching a movie. I must have said something funny because he poked me in the ribs so I started laughing. At that exact moment my sister, Olivia, otherwise known as “Liv” walked in the front door.


“Hey Liv, this is my friend Chris.” I said, attempting to introduce them.

“Hi,” she said back with an angry expression and a heavy sigh. She went back outside, slamming the door behind her.

“Well that went well,” Chris stated. “Should I leave?”

“No it’s fine, I’ll be right back.” I excused myself to go outside. “Olivia? Is everything okay?”

“No, it isn’t.” She looked deeply unhappy.

“Do you want to talk about anything? I’m here for you if you need to talk.”

“Why would I talk to you? You are the last person I would talk to. You’re not my friend, not even like a sister. On top of it, you’re a s***. How many guys are you going to bring over? Every time I come over you’re kissing and cuddling and getting on with someone in the house. I just walked in and see you on the couch with some guy I don’t know and there are cigarettes on the kitchen table. When I’m upset, I get angry. Right now I am angry!”

My heart started racing but not as much as it used to in these situations. I closed my eyes, taking a deep breath. “Why are you so upset?” I asked, calmly.

“Because you’re a skank and you do whatever you want and you don’t act like a Christian and I’m not going to talk about it with you. Besides, there are cigarettes on the kitchen table. I don’t know this person.” She was talking in a high pitched tone. Most of her words were blurring together. I reminded myself to listen and be patient.

“He is trying to quit smoking, and he’s a good person. He actually asked if we go to church because he wants to go. I told him you go every week and might be a good person to ask. And…” I drilled off feeling emotional.

“Dad met him and so has mom. They both liked him a lot; he’s pretty awesome if you get to know him. I told him I’m proud of him for trying to quit smoking and if he really wants to go to church that maybe I would go with him.” I spoke slowly.

“How many guys are you going to bring over?” She asked. I told her I had lots of friends and that I wasn’t really dating anyone. My voice got high and I started running all my words together as I tried to explain myself. I didn’t have to explain myself to her. I didn’t want her to hate me but I had no control over her feelings.

“And saying I’m putting out with lots of guys every time you come over is an exaggeration. Chris is just a friend.”

“What about the last one?” She snapped.

“But yes, we did go on a few dates…” I realized the only way to diffuse the situation was to walk away. I was use to feeling racy in these moments. I was used to fighting back and crying and having her “win.” She usually won by getting to me to an emotional breaking point where she could tell me that I needed help, I was a mess, and no one liked me. I decided to walk away.

“I’m going back inside…” I murmured, feeling slightly hopeless but definitely improved as far as reacting goes. I didn’t feel like I was at a breaking point. I didn’t cry. Her freak out didn’t take away my peace of mind.

She got up in my face and flapped her hand dismissively a few inches away from my nose. “Get out of my face!” She turned around and sat on the porch steps. I went in the house. Chris was standing up nervously in the doorway. “I know how important family is… I didn’t mean to do anything wrong… I will leave.”

Olivia’s boyfriend Jared pulled into the yard in his little, red car. I looked out the window at them. They were kissing. I saw her glance up at the window, inside where I was looking back at her. Her angry, hazel eyes peered back at me in the cold autumn afternoon. A second later she was getting in the car with Jared. They peeled out and I sat down on the couch. Chris and I finished the movie in silence. 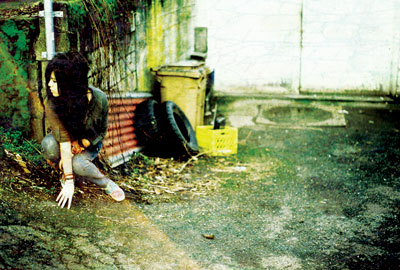