“What does it feel like?” she asked but she wasn’t really asking, I don't think she really wanted to hear the answer. No matter how much she wanted to understand, she couldn’t. It wasn't fathomable.


“It feels okay. Somewhere in between the inability to consume oxygen and finally being able to breathe.” It felt awful uttering those words. The mere thought of saying someone’s death let me breathe, it put daggers through my heart, but it was the truth.


She nodded her head not really sure what to say in response. No one really knows what to say when you tell them someone is dying. It’s almost as if their tongue is being ripped from their jaw the moment they hear those words, sort of selfish, don’t you think. Then again, I’m waiting for my grandpa to die, checking my calendar to see which Thursday is most convenient for me, so really who’s the selfish one.


I didn’t know how it felt. One moment I felt as stable as the horizon. I was staring at it, really taking in the lines and all of that bullshit and I was balanced. But then as the sun set, my balance crumbled.


It’s sort of like having the carpet ripped out from underneath you. I know that phrase is used often, mostly for irrelevant topics, but I’m standing on a nicely knitted rug, pattern and all, and some jerk just tears it from underneath my feet. I scramble to hang on to something, anything, anyone, but I can’t; I fall straight on my ass. The kind of fall where you can feel the bruise forming the moment your cheeks hit the ground, the one where your butt feels like a flat prairie with cows roaming on it just nibbling the grass. Don’t bullshit me, you know exactly what I’m talking about.


The whole concept of death is the most depressing thing on the planet. No one understands it unless they’ve gone through it, and even then, they don’t know exactly how you’re feeling, only you do. Death is the loneliest concept in the world, then again it is death, no one said it was accompanying.


Recently I’ve been staring up at the sky a lot, kind of feels like death because it's depressing and lonely, but it’s comforting. There’s comfort in staring up at this vast open space that doesn’t really make sense. My friend reminded me that we go somewhere when we die. Where? No one knows, and that’s what’s really screwed up about it. Everyone is just supposed to accept the idea of entering this massive emptiness. He reminded me that at one time I thought we all became stars, just little specks of fire glowing in a huge universe. Maybe I heard it in a really sad Coldplay song, most likely, I’m placing all of my money on that one because it’s true, but “one day we’ll be living in the stars” and somewhere in the really screwed up concept of death, there is comfort in that idea. My grandpa won’t be lost in outer space, he’ll be glowing among the planets, watching the world below him like old home movies. 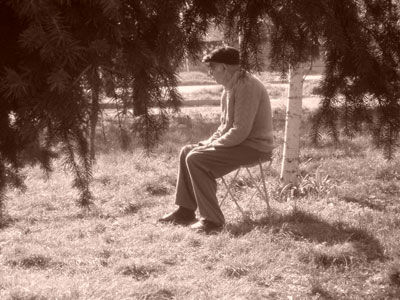