A Play to Remember | Teen Ink

A Play to Remember MAG

I had never pictured myself in this situation. The clock was running out as the sweat trickled down my face. Every muscle in my body felt like taffy from the strain, but my ambition told me not to give in.

It was the fourth quarter and there were a mere 50 seconds left. The score was 75 to 74. The other team had possession of the ball. My teammate was carefully watching the movements of the man with the ball at the top of the three-point arc. He was dribbling it slowly between his legs, front to back, as if he were making a mockery of our efforts. Tension was high. The man with the ball was their leading scorer. My teammate made a desperate lunge for the ball but the handler maneuvered past him and three others.

At the last second, I raced into the lane, obscuring his path. I was a split-second too late and we both hit the ground, sliding across the sweaty floor. When we finally stopped, we landed beside each other. There wasn’t a sound in the gym as the ball whipped around the rim. It started to slow and balanced itself on the edge. My opponent and I were still lying next to each other, eyes wide. Then, the ball gracefully sank through the basket, followed by the shrieking of the referee’s obnoxious whistle. They were calling a foul - on me! Now they had a chance for a three-point play.

My teammates were disgusted with me, which didn’t help my already deep sense of remorse for letting them down. My opponent was handed the ball as he stepped to the line. He raised the ball to his chin, bent his knees slightly, and released it into a beautiful arch, sending it through the hoop.

Now the score was 75 to 77 with just 15 seconds remaining. Our chances of winning now seemed like a dying light on the horizon. I knew I needed to take matters into my hands but I was afraid I might let my team down a second time.

I was passed the ball from out of bounds and wasted no time bolting down the court, weaving in and out of defenders trying to find the open man. Defense was tight, but with only three seconds left, I made a final desperate act and pulled up for the three-pointer. I jumped as high as my legs could thrust me, and released the ball with a flick of my wrist. I held my breath as it soared through the air, barely making it over the hands of my defender.

Everything slowed. Terrified, I imagined the ball ricocheting off the rim into the stands. Then, to my relief, the ball soundlessly dropped through the net. Time resumed and I hit the floor like a boulder, landing painfully on my tailbone. My defender landed beside me. Both of us were crying, but for different reasons.

Screams bellowed from both sides of the gym of joy, anger, and disbelief. I walked off the court with teammates chanting my name, spectators shaking my hand, and violent scowls from the opposing team. I felt like sobbing and laughing all at once in this moment I will never forget. 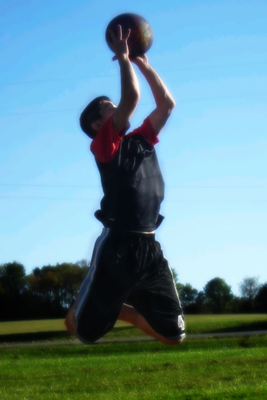