Finally, a week before my senior year began, I toldmy parents my decision. My dad, confused and frustrated, began interrogatingme.

"How are you going to be able to give up something youlove?" He did not understand the reason for my decision. "It seems Ihave wasted a lot of money for you to be able to give up basketball like this!You still have four younger siblings who have to go through college. How couldyou decide this?" Tears rolled down my face. I should have expected thisreaction. Then my mom spoke.

"Shana, I understand your decision, butwhy didn't you tell us sooner?" Her voice was more soothing than myfather's, and I relaxed a bit. Although my dad was in denial, my mom hadsuspected for some time that I had decided not to play in college.

Sincethe age of ten, I have played basketball in school and in the Amateur AthleticUnion for ten months of every year. My whole life has been basketball. I watchedevery NBA game on television. I stayed up until eleven o' clock just to watch theUConn men beat Duke for the first time in the NCAA national championship. Everyweekend I played four or five games. Until this summer, it was mypassion.

Playing in the Amateur Athletic Union gave me the chance totravel to many exciting places. At the age of eleven, I went to New Orleans,strutted down Bourbon Street and entered the Super Dome. At 14 I journeyed to thedry land of Oklahoma, and paid my respects at the memorial for the Oklahoma Citybombing. Travelling across America, I stepped outside the boundaries of Cromwelland experienced places my friends have not. Living much of my life aroundbasketball forced me to balance homework and projects on the weekend between myfirst, second and even third game. With far more responsibilities and commitmentsthan the average student, I had to develop a mature, responsibleattitude.

But during the seven years I dedicated to basketball, I wasnever able to see any of my sister's soccer games. Even though I tried to findtime to watch her, she would resent me and believe I did not want to go. I alsomissed weekend sleepovers with friends. Everyone else could see friends outsideof school except me. I would come into school on Monday excited to catch up ongossip, but I always felt like an outsider. These were the sacrifices I made toplay the game I loved.

As my senior year approached and universities andcolleges started sending recruitment letters, I realized I did not want to makethe commitment required to play basketball at the college level. College ballrequires grueling work. I would have practice every day, in addition to the manyhours of studies. Although I always dreamed of playing college ball, I now wantmore time for academics and socializing. From my basketball travels, I know Iwant to see more of the world, but instead of traveling with a team, I now dreamof participating in a study-abroad program.

The decisions I have made areonly possible because of what I have experienced in my past. Because of mybasketball experience, I confidently made the decision not to continue to play. 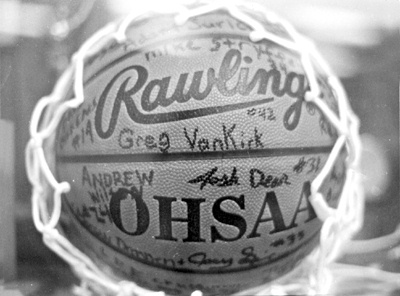