Fourthquarter, 1:51 left, and the last football game of our undefeated season. Coachurgently called a time-out and approached the huddle of eleven sweaty, fatiguedathletes.

"You all have come too far to give up now. So suck it up,and put one in the end zone!" Encouragement was evident in his tone, andeveryone in the huddle heard it. Knowing he had faith in us gave us more momentumthan we could have imagined. Our quarterback, Jeff, knelt in front of the groupand began relaying the next play. A fullback, I lined up three and a half shortyards from him.

"Blue 16! Blue 16! Set, go!" At these words,the entire team lunged forward. A gap about as wide as a doorway formed betweentwo players. Eyeballing this opening, I raced to it and shot through like arocket. Not far behind was our running back; he held the ball tightly, with twohands, as if it were a $100 bill and every man on the field was trying to stealit.

The first threat was a huge linebacker who happened to be charging meat full steam. To protect the runner, I lowered my shoulder into the burlylinebacker's gut. I shut my eyes and prepared for a catastrophic blow. Much to mysurprise, his stomach felt like a marshmallow and he bounced off my shoulder. Hisblock freed my running back to charge down the field to our opponent's 15-yardline. This amazing run had only taken 20 seconds from the clock, which now read1:31.

We were 15 agonizing yards from victory, and a perfect season. Whenthe the crowd quieted, our team regrouped and huddled on the 21-yard line. Jeffrelayed the upcoming play. By the time our quarterback hovered over our center,the clock had run down to 57 seconds. Time was running out. Each player crouched,anticipating the words that would set everything into motion. Sweat gathered atthe tip of my forehead and ran down my face.

"Orange 17! Orange 17!Set, go!" When Jeff spoke those magical words, we all rose and beganprotecting him as he set up behind the wall we built for him. He found an openreceiver

and gunned the ball into his chest. When the ball hit thereceiver's chest, his arms covered it and he fell to the ground. The ball wasplaced on the three-yard line and the clock read

Without consulting our coaches, Jeff rushed everyone to the huddle and called afullback dive. That was my play! I rushed to my stance and anticipated Jeff'ssignals. Finally, he said the words that made me leap from my position,"Set, go!"

My eyes were locked on my destination, the goalline. It lay three yards from me as I lunged with all my remaining strength tothe spot of victory. I encountered a force similar to a brick wall right before Igot there. My legs continued pumping, but the impenetrable force would not beswayed.

Unfortunately for him, my heart was twice as big as his colossalarms, and I refused to surrender. The longer he decided to maintain his spot, theharder my legs pumped. Eventually, his grip loosened, and his position recededinto the end zone. I had endured the physical strain longer, and it had paid off.The ball clenched in my hands crossed the goal line, and put us ahead.

Our perfect season was now official. 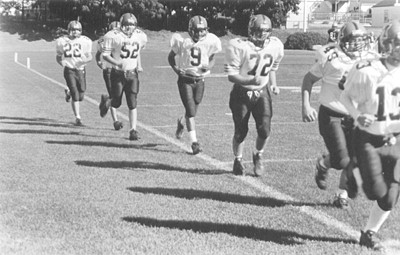