Never before have I witnessed a place transition so seamlessly from city to countryside. Everything is urban and structured and beautifully sophisticated: buildings average three stories and are crowned with quasi-turrets and other castle-like appendages; architecture swings between Gothic and Victorian romance when abruptly the postcard changes and you are viewing a far wider, sweeping vista with mulberry trees and sturdy fencing.

I read the station signs as we pass: Fleet and Farnborough.

I wonder if anyone will ever understand what I am doing right now. I wonder if anyone will ever read what I am writing on this page, words bleeding through onto the plastic table of a speeding train, and appreciate the will power I am exercising. It is detrimental to divide my attention between receiving and interpreting right now, foolish to assume I will capture just as much with my head down, shoulders hunched over my journal, when I could be staring straight out at the British landscape.

I look around the train, expecting to see something different on the faces of these people. If they were Indian or Chinese or even Italian, I might be able to tell. Their faces might be structured differently: higher noses, narrower chins, darker skin. As it is, I look at a British person and can find no distinguishing feature to separate them from Americans. They look like the filling of a train bound for Chicago. They look like me.

I can't decide if I find that comforting. I may not have decided by the time we reach Waterloo when they begin to melt into a larger, different crowd. Any security I felt at comparing the Anglo-Saxon slope of our noses may have dissipated.

I feel something tingling in my fingers as I write, something that makes it difficult to grip the pen properly. I want to push myself up from my chair, stretch my arms toward the sky and scream. I have become Bill Bryson in Neither Here Nor There, Forster's Lucy venturing into a foreign land.

What am I doing? Where am I going? Not just London, not just a vague city, a giant red blot on a map of England - where? To work? To love? To a small, closed-down shop in Soho to open a vintage boutique?

It doesn't matter. I'm on a train barreling toward London, and I am mesmerized. 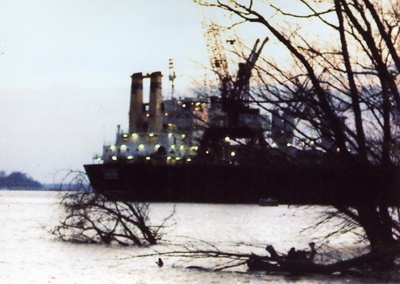