It’s rich, smooth, creamy, and melt-in-your-mouth delicious. That’s right; the sweet temptation of chocolate is hard to resist for most. Since 1100 BC, it has become one of the most popular flavors in the world. The average American eats 10-12 pounds of chocolate a year. It is not physically addictive, according to www.tinyprints.com, but some would tend to disagree. According to the World Cocoa Foundation [WCF], some 50 million people around the world depend on cocoa as a source of livelihood (wikipedia.org). “It’s delicious and delicately melts in your mouth”, embellishes Taylor Tallman, a junior at CHS.
More recently, chocolate has been recognized to have many health benefits. Chocolate is the new broccoli according to an article in The Washington Post on “Super-foods.” Dark chocolate is the “healthy” stuff, which is classified by 65% or higher cacao content. It contains antioxidants, which can reduce the formation of free radicals in the blood stream, sort of like a vacuum cleaner for your body. Scientists claim that chocolate can lower blood pressure, reduce your cholesterol by up to 10%, and reduce your risk of blood clots (http://longevity.about.com). Also, despite common belief, chocolate does not cause acne, and contains significantly less caffeine than coffee or tea.


Chocolate can also make you happier, not only because it’s so incredibly delicious, but because it contains alkaloids such as theobromine and phenethylamine, which have physiological effects on the body. It stimulates endorphin production, which gives a feeling of pleasure, and contains serotonin, which acts as an anti-depressant (http://longevity.about.com).
Chocolate contains raw and processed foods that are created from the seed of the tropical cacao tree. It most commonly comes in dark, milk, and white varieties, with cocoa solids contributing to the brown coloration. About 2/3 of the world's cocoa is produced in Western Africa (wikipedia.org). It has gathered an American following over the years, inspiring the Utah Chocolate Show, and the Chocolate of the Month Club, which has about 100,000 members.

Chocolate has had a long and revolutionary history according to Mrs. Catherine Fox-Anderson, Spanish teacher. It was also an important luxury throughout Pre-Columbian Mesoamerica, and considered the food of the Gods by the Aztecs. Cacao beans were often used as currency. For example, one turkey was exchanged for approximately 100 cacao beans. The majority of Mesoamerican people made chocolate beverages, including a bitter drink known as xocol?tl, which was believed to fight fatigue. Chocolate came to Spain in the 1500’s from the Aztec culture. Mrs. Fox-Anderson explains that the Ladies of the Spanish court discovered chocolate’s tasty qualities by sweetening it, and the emperor Montezuma made many dishes with chocolate. It was often used to help the Spanish army march long stretches while in battle.


Chocolate is a complex food including over 300 compounds in each bite, meaning it has many flavors and elements combined. To fully appreciate chocolate, take the time to taste it. Chocolate tastes different in every region, like a fine wine or coffee. It’s a delicacy that has been enjoyed and even worshiped throughout history. The delicious connection between health and chocolate is just another reason to believe that “Once you consume chocolate, chocolate will consume you" (www.facts-about-chocolate.com). 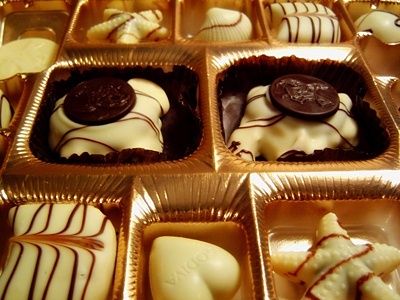 The author's comments:
this is an article I wrote for our school newspaper... I wanted to write about chocolate, so I did.
Post a comment
Submit your own