The Rica of the Poverty in Costa Rica | Teen Ink

The Rica of the Poverty in Costa Rica

At least you’re not starving in Costa Rica. One of the people living in the streets would give almost anything to have half what you have.

Americans as a general rule, feel themselves to be superior – to each other, to other countries. But is a typical American so much better off than one of those starving Costa Ricans?...

Americans use countless statistics to prove so. The poverty headcount ratio at the national poverty line in Costa Rica was 20.6 % in 2012. The school dropout rate was 11.1 percent in 2011. Costa Rica is a third world country. It lacks proper health care, the water is dirty, there is disease.

But as I walk the poor sections of Costa Rica, littered with tortilla chip wrappers sailing in running water that streams past landmarks of discolored dung planted into the poorly paved sidewalk by careless walkers, where propped up sheets of rusted metal act as shelters; I look up and see green mountains slightly reflecting the blue tinge of the sky, an endless sky where clouds stretch their wings without fear of skyscrapers. And, I realize why there are not thousands of Costa Ricans fleeing to America. Why, in fact, some Americans choose to abandon the comforts of their electrical appliances and oil heating to immigrate to Costa Rica!

In Costa Rica, there is freedom. In America there is freedom too, but a structured sort. Costa Rican freedom means dogs running alongside, not owners yanking them by the chains of a leash, but alongside each other. Where they are not as much pets as man’s best friends. Next to these dogs, boys spin on skateboards between glances at the ladies, only to move aside for a truck billowing down the same road at 50 miles an hour. But the car will not hit the boys, nor the dogs, for wandering into its territory. Here, the roads are shared by everyone. They belong to everyone after all

I walk past splintering pieces of wood nailed together to support twiggy baskets of fruit. Behind which, a lady waits to make a sale. The mangos and bananas in the basket bear their bruises, like the scraps of wood that support them. But like the wood, areas of smoothness emit assurance that there is ripeness to be found underneath. And with every sale, the lady behind the stand smiles, as she becomes closer to her aspiration of one day standing behind a counter, where a glass window reflects the shine of the juiciest mangos in the area. It’s what the lady the next block over did. No banks, no student loans, no vendor licenses- this is the true meaning of the American dream.

I walk past a group of boys cheering as one kicks a stained, slightly dented soccer ball between two, large filthy rocks placed a short distance apart from each other on the narrow pavement of a side alley. There is a boy who stands to the side, while he juggles another soccer ball back and forth between his browned feet that are half the size of mine. I marvel, for this is a trick I am still struggling to master. Maybe having the Adidas Predator cleats does not make that much of a difference after all.

I savor the feeling of my tongue curling, as I roll the word “hola” off of my lips in my best Spanish accent to the girls and boys standing next to their mothers in their doorways, doorways that are more or less the stretch of their yards. Almost everyone returns my greeting with a shared smile and a “cómo estás”. And a crazy, glowing part of me feels that they wait there just for the thrill of sharing that smile.

My tour guide stops to talk to almost every person we pass. At least that is what the moaning kids in my tour claim. I, however, while she chats, use the moment to take a deep breath of the fresh Costa Rican breeze.

The schools and the homes may not have bricks that are quite as smooth as America’s, paint that is not quite as shiny. But, they bear drawings of children dancing, colors bright as rainbows. American scholars say that colors impact mood. Perhaps we need some more yellows and oranges on the white plastered walls of America.

The founder of the community service foundation I volunteered at told me something at the beginning of my trip that at first, struck me as a little hypocritical:
She spoke to me of how money does not buy happiness. Yet, I thought to myself, is her foundation not about getting money to these impoverished people?
Her foundation is about getting money to these impoverished people. It is about filling in the statistics. But it’s about more than that. It’s about looking beyond the chipped shelters that resemble the “dumbbell” tenements of the 20th century, beyond the adults that look thirteen years old. Yes, there is room for improvement. Yes, Americans, as a general rule, are in a much better place health wise. But when I look up at the picturesque mountains and bright blue sky in the backdrop of a scene of chipping walls, some may view the background as out of place. I, on the other hand, only think that it highlights the inner beauty of the homes, of the lives, the Costa Ricans have constructed for themselves. 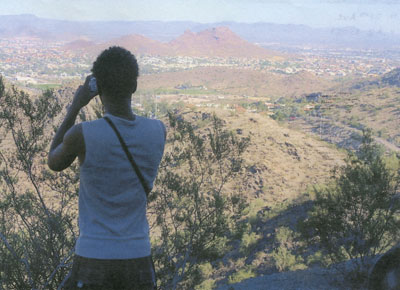 The author's comments:
I wrote this article after participating in a teen tour to Costa Rica, in which I engaged in 30 hours of community service in the poorer sections of Costa Rica.
Post a comment
Submit your own

Favorite Quote:
Sometimes you just need to take a nap and get over it. -Maura Stuard

View profile
Hi! I saw I the forums that you wanted some feedback. I feel like this article has real potential but is a little disorganized. The beginning is a bit of an awkward way to lead into the story. I think it would be more interesting if you contrasted why people think America is greater than Costa Rica and then turn it around. Sort of ask the audience 'but is it really better?' Of course it shouldn't be in question form. Try to say your opinion more indirectly. You don't have to say there is a hidden glory in Costa Rica, just try to show it. I feel that the biggest downfall is not having a focus in paragraphs. I think improving the flow would have a wonderful effect for the piece. I really enjoyed the part about the fruit market. I think that paragraph is pretty insightful, particularly in the beginning. I thonk you should reread the piece and articulate exactly how you want to express your opinion. It is definitely a worthwhile proposition but could benefit from more thoughtful writing. Good luk with your writing! I hope some of this will e helpful.