I slid down the iced hill, the violent wind whipping hair around my eyes like a blindfold, the cold sweat on my brow seeping through each pore in my face and freezing my skull. Blood ran hot in my veins, furiously pumping fuel to my brain, entertaining thoughts of how to get back at my parents for driving us all the way to Pinetop for the fifth weekend in a row.
I was sick of waking up at 5:30 each morning and bundling up in a cocoon of sweaters and wooly socks, piling into the car with muddy skis in tow, crisp flakes of ice dripping onto our jackets with the rising temperature of the heater. Worst of all were the tall plastic ski boots. Forcing my feet into them was torture and fastening the clasps nearly impossible. As a finishing touch on my parents’ expertly crafted weekend in hell, my mother had a tendency to rummage through her pockets once we were settled in line for the ski lift and produce a bottle of sunscreen. I thought I’d rather get cancer than have to deal with this, but if I resisted she’d splotch it on my face herself, so I usually gave in.

As I raced down the hill consumed by these thoughts, a couple of snowboarders passed me by. Their kind had a habit of falling on me when they got off the lift, always jabbing their boards into my spine, and I hated them for it. I rolled my eyes and lagged behind the group in hopes of avoiding the usual collision with yet another clumsy, self-assured snowboarder. Once they turned at the bend ahead, I sped up. Out of sight and out of mind, I was preoccupied yet again with thoughts of revenge. Should I pout all weekend, adopt the silent treatment, or should I put up a fight, whine excessively? The temptation of a war of words with my parents presented an option far too alluring to resist, and a slew of potentially sarcastic and cutting remarks filled my head.


AAAAAAAAHHH!!! Before I knew what had happened I heard a shrill, high-pitched scream that rang in my ears. My throat was dry and burning with the friction of effort â€” the scream was mine. My arms were wrapped tightly around a stranger’s body, my contorted fingers gripping the boy’s unfamiliar shoulder blades in fear. One of my skis was missing and the other one had become an entangled mess with the boy’s legs and snowboard. We were rolling down a hill of loose snow, the powder getting into my eyes and clothes, numbing my body and blinding my sight. Nearing the bottom of the hill, we slowed down and finally came to a full stop, buried in four feet of snow. The air stood still for a moment before we both let out sighs of relief followed by laughter. He blinked away the delicate snowflakes that danced on his lashes, his deep trembling laughter melting away the ice on cheeks. Worn out by the adrenaline rush that had left our hearts thumping wildly in our chests, we lied still for few minutes until we heard shouts from atop the hill. “ARE YOU TWO OK??!” Without pausing for an answer the blurry silhouette that had called to us initiated a rescue mission, recruiting passersby as volunteers.


After half an hour of swimming through the powder, we reached the top of the hill. Our legs sore from the effort of climbing, we took our time finding my missing ski and readjusting all that had been skewed by the accident. “It was nice meeting you,” he said, the way one would deliver an inside joke. Before I had a moment to catch my breath, he was gone. 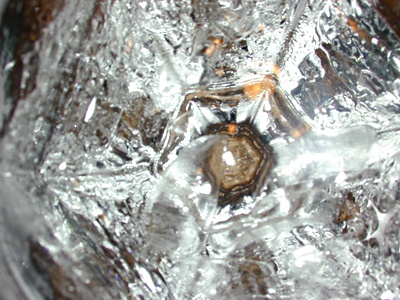