The Poetry of Motion | Teen Ink

The Poetry of Motion

I can remember the strong and sweet wind that enveloped me as I approached the golden shoreline. The Mexican sun was sweltering, but the wind blowing from across the Pacific was cool and restless, making my sundress flutter in the wind. As the sun set, the resort’s hotel staff was preparing for that night’s Mexican Fiesta event. As the sun hung high in the sky like a golden red yolk, tables were set up with fiery red table cloth, stringed lights and cords were strewn across the air, and extravagant tiger lilies and birds of paradises sat regally as center pieces. Giant trays of authentic Mexican food were brought out: tamales, mixed rice and beans, enchiladas, bistek, frijoles, mixed vegetables in sauce, quesadillas and of course, tacos and guacamole. The event started in the late evening as the staff, dressed in colorful costumes, began to perform dances and cultural arrangements. Fireworks were set off and drinks were served. After eating, I decided to lay on the beach to watch the remaining embers of the sunset fade away. As I watched the sun disappear to my right from behind an arm stretch of land across the horizon, I noticed a bright star emerge to my far left. I then realized I was about to witness the enchanting transition from day to night. The sky was laid out above me, a celestial stage. Stars appeared suddenly as if God had poked holes through the floor of heaven. I gazed at the extravagant canvas above, pink and deep red and dark blue hues intertwining and mixing like spilled paint. When the last of the reds had faded leaving only the purples and blues, the stars were abundant now, twinkling and shimmering. I glanced upwards and traced the constellations with my eyes, when suddenly I saw a bright shooting star streak across the heavens. It was absolutely breathtaking, feeling the universe twirl around me. I envisioned a camera zooming out from my exact spot on that beach, then the entire earth, the solar system, the Milky Way Galaxy and the entire universe. On that beach in the land south of the border, I smiled at the beauty of life and the seemingly insignificant hob-nob of the human race. 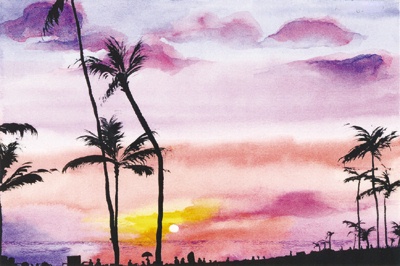 The author's comments:
Claire is a seventeen year
old diagnosed with Wanderlust with nothing but her big dreams hoisted upon her
shoulders. She resides in Northern New Jersey, blessed with the presence of
the New York skyline. Her photography and writing has been published in
various online publications including Inscribed, Ulterior, The Miss G Project, Photo Laureates, Reflections, and the Live Poets Society of New Jersey. Her dream is
to study cultures, travel, write, and of course, live life, experience to experience.
Post a comment
Submit your own