“The scramble to get into college is going to be so terrible in the next few years that students are going to put up with almost anything, even an education,” said Barnaby C. Keeney, who was president of Brown University from 1956 to 1966.

This quote is both disturbing and thought-provoking. As a student, it worries me because it shows what the bigwigs who decide our future think of us, namely, very little. Keeney assumes that students do not like school and will only put up with it if they think they are getting something in return. This is a tragedy, since many students enjoy school and think of college as the next challenge, rather than the next drudgery.

At the same time, Keeney makes an excellent point. Many wake up senior year and say, “Oh, dang, I have to go to college.” Basically, the majority are lazy. Just look at any class late in the afternoon and derive the function for the number of students sleeping. Uh oh, might have to use a calculator (that’s because math isn’t a good subject in high school for the sleepers)! Many students are very intelligent, but few have the drive and the will to learn. A work ethic will beat out genius every time.

High schools are both praised and kicked in the face at the same time. They are praised because the competition for spots in college is so fierce, a testament to both the improvements in our public school system and the fertility of women (more babies, same number of spots), but they are looked down upon because schools aren’t teaching, since students will put up “with almost anything, even an education.” This assumes that students were not getting an education before and will only get a decent one if they, not the high school, take responsibility for what they learn. High schools either aren’t doing or cannot do their job.

As much as schools try to motivate students, only they can inspire themselves to be successful. So while it is not really the schools but the students who are responsible for laziness, parents get mad at the schools, demonizing teachers who are trying to teach students who do not want to learn. The government tries to throw more money at the problem when the best solution (but not most politically correct) would be to fail students and throw them on the street until they decide that an education is not a right but a privilege.

The American education system as a whole is in trouble. Universities, especially prestigious ones, have it the worst. A college education has become a necessity and every parent wants their child to get the best one. These parents, however, do not take into account that their child might not be qualified to attend say, Stanford. The student then whines to their rich parents that Stanford did not accept their “brilliant” 2.0 GPA or “wonderful” extracurricular activities. So Mom and Dad loose the wrath only pompous parents possess upon the university. For this reason, working in admissions must be the worst job in the world. While the poor employee tries to explain that only exceptional students are accepted to Stanford, the enraged dad screams obscenities and insists his son is “the best student who ever applied to Stanford. I’m on the other line with my lawyer right now... yada, yada, yada” for the next 45 minutes.

It is these situations that further confirm the former president of Brown’s prophetic assertion, since competition is fiercely contested. However, the competition will not be fiercely competitive. While many students will apply to colleges, the ones who deserve to go will get in, and the rest (no offense) will regret that they spent their high-school years worrying about dances, drinking and drugs. This is not elitist, just truthful. Geniuses will be left out in the cold and the hard-working ones who could not touch them in an IQ test (if they could find the time to take the test) will be walking to class. That is what the quote means. If someone can bite the bullet, buckle down and work hard for an education, they will be rewarded. Those who waste time and rely on snobbish pride and worthless self-righteousness will be sadly disappointed when they find out that their boss is the person who they assumed they were smarter than in high school. 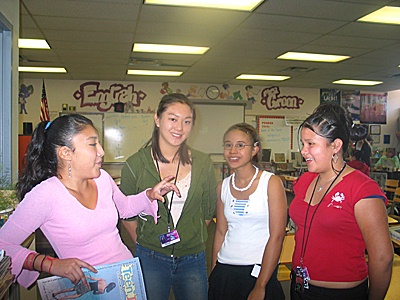