Thirteen and a Woman | Teen Ink

Thirteen and a Woman MAG

As a teenager, I usually consider myself immune tomost world issues, even ones that will affect me in a few years. Equal pay in thework place - I don't need to worry about that for another ten years. Sexualharassment and rape - my mother does not let me go anywhere where that's anissue, aside from school, where I don't worry about it anyway. Sexism at work - Idon't work, I'm only 13.

One day in homeroom I listened to a conversationbetween two boys sitting behind me. They were discussing which girls in the classthey would have sex with.

"Would you do it with her?" oneasked. The other looked at the girl in question.

"Yeah," hereplied. "How about that one?"

I have heard conversations like this during the past few years,since my male peers learned sexual slang. Nothing particularly offends meanymore; I've heard it all so many times that I've gotten used to it. The generalconsensus of boys I know is that they would not have sex with me, as I am not"hot." The fact that I've gotten used to this probably says somethingabout sexual harassment in my school, which the administration pretends does notexist.

When I walked down the street in Boston recently, a man driving ared muscle car leaned out his window and shouted something at me. I couldn't hearwhat he said, so I ignored him. It didn't occur to me until later that it wasprobably something offensive.

These incidents have reminded me, atvarying times and to varying degrees, that being only 13 doesn't reallychange who I am. I'm still a woman, which means I have to deal with all theissues that come with having women's parts.

Last year, I went with two ofmy male friends to get ice cream at a popular spot in town. Behind the stand wasa steep hill with some construction at the bottom. There were two huge piles ofsand and a bulldozer. Someone had the idea to go there and throw clods of dirt ateach other.

And so Joe and I staged an all-out dirt war against Ben, andwe were gaining the upper hand when Ben tackled me. He held me down while Joestuffed dirt down the back of my shirt. I shrieked and tried to get up,pretending I was afraid. I wasn't really frightened until I realized that,despite the fact that there were 40 people standing 50 feet away, no one thoughtto find out why a young girl was screaming. If Joe and Ben, both twice my size,had in fact become violent, and I had screamed in real fear, the people who couldhear me would have assumed we were playing.

When I got home, my motheryelled at me. I had only left a message on her cell phone telling her where I wasbut the real issue was the gender of the people I'd been with. She had beenworried about the same things I had just become aware of.

I didn't admitto my mother I agreed with her, of course. I argued instead, "Ben and Joeare perfectly nice kids; you met them and have said so yourself."

She replied that they still had hormones and superior muscle strength andthat I shouldn't have been anywhere out of sight with them.

Silentlyagreeing with her, I screamed, "Why can't you trust me? I was only gone fortwo hours."

She retorted that it wasn't an issue of trust. I stillthink it was, despite various co-ed events I have since been allowed to attend,which have proved otherwise.

My mother majored in psychology and teaches acollege course called "Psychology in Women," which gives her an upperhand in discussions about male friends. My mother knows all the rape statistics,where most sexual assaults occur, and when and under what circumstances.Apparently, friends of the victims are to blame in many sexual assault cases, anda significant percentage occurs at parties.

I didn't realize any of thisuntil I went to my friend Robert's birthday party. I promised my mother that wewould be supervised, probably in the living room, and never out of his mother'ssight.

But the party was in the basement. His mother did come down, butonly to ask if we needed more food every 45 minutes or so. No one was raped,despite an approximately two to one male to female ratio.

I have to thank my mother foryelling at me that day I went out for ice cream with friends. If she hadn'trepeated what I had been thinking an hour earlier, I probably would havedismissed it as paranoia and never thought about it again. Ignorance is a greatweakness. Knowing exactly what I'm afraid of makes it easier to sleep at night.I'm only afraid of the dark when I don't know what it's concealing.

Irealize, although perhaps not to the degree that I should, that being only 13does not change the fact that I do have to deal with issues like sexism andsexual harassment since one day I will have to deal with the things my motherwarns me about. 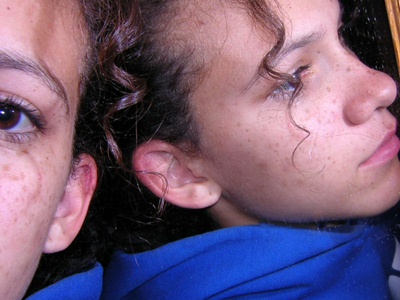