On the Road to the White House | Teen Ink

On the Road to the White House MAG

January 24, 2004: my cousin and I decided to depart on an adventure to the "Live Free or Die State" of New Hampshire. We would be met with sub-zero temperatures, too many tollbooths, minimum speed limits, and seven Bush-bashing, tax-raising, government-expanding, Volvo-driving, sushi-eating, latté-drinking, New-York-Times-reading Democrats. Even though I will not support any Democrat in the coming election, I was fortunate to hear one of them speak. This man is one of the few Democrats who isn't off his rocker: Senator John Edwards of North Carolina.

John Edwards was due to be at the Soda Shoppe at the outdoor Laconia Mall, a place that had clearly seen better days. The parking garage was literally falling apart, the smell of smoke hung heavy in the graffiti-covered stairwell, and two stores sold the same thing. Luckily we didn't need to explore the place too much because we saw people waving "John Edwards for President" signs outside the Soda Shoppe.

We squeezed inside the packed restaurant where every chair, table and corridor was occupied. We were able to make it down the steps and into a tight corridor with some windows for food pick-ups that revealed the rest of the restaurant, which was sort of a generic Friendly's. The walls were driftwood, as if the ocean were right there and not 45 miles away. In the center was a red U-shaped diner-style counter. Its white scratches from years of exposure really brought the room together. More and more people squeezed into the classroom-sized area, certainly a violation of all fire codes.

John Edwards didn't show up on time. He was fashionably late, 30 minutes fashionably late. While we waited, strange funky smells that would kill you after long exposure began to rise. I couldn't decide if it was the food that they continued to serve with 400 people standing shoulder to shoulder, or the 400 people themselves.

John Edwards finally arrived, stopping every two feet to shake the hands that lunged at him. He hopped up on the counter and the first things he said in his Southern accent was, "Sorry I'm so late. I couldn't get inside." Wow, a politician who can't lie. Now I've seen everything.

I expected Mr. Edwards to start serving up some of the root-beer floats this restaurant is supposedly famous for, but no, he began a speech. If he wanted to give a speech, why not do it at the town hall, or outside? He must have been going for that cozy Southern, down-home feeling, and boy, was it cozy.

Edwards' speech focused on the fact that there are two Americas. Well, the last time I checked, the Confederacy no longer existed and the United States was united. Anyway, Edwards told everyone it doesn't have to be this way. There shouldn't be two public-school systems, two tax systems and two economies.

He talked about moral issues, explaining that America has the moral responsibility to help the 35 million Americans who live in poverty, and said that kids going to bed hungry is wrong. Then Edwards discussed AIDS, which he described as an issue of right and wrong, whether popular or unpopular, and said that we should help people with AIDS in Russia, China and Africa. Well, yes, Mr. Edwards, AIDS is an issue, but why should we focus on Russia, China, and Africa? If we are going to help those with AIDS, we should focus on our own country.

He then shared his experience with segregation, telling us how, in elementary school, his teacher announced to the class that he was leaving because the school was going to be integrated. Then Edwards said that even today the country is divided by race. This makes absolutely no sense. Today everyday places are not separated for blacks and whites. It is, in fact, illegal. I really don't see how our country is divided by race, because if it were, I would stand up against it.

Once the moral issues were tackled, Edwards talked about building up America, specifically education. He informed the crowd that America was not built by cynics but by optimists, and proposed raising teacher salaries. But doing this would accomplish nothing. Most public-school teachers are lazy. Money will not motivate pathetic teachers, because they won't get fired. Then he proposed an idea called College for Everyone. Both of these ideas would raise our taxes.

He ended by saying that he has lived in the real world, is the only man who can beat Bush, and that he's been preparing for this fight his whole life. Everyone had heard this before, but not from Edwards. You could hear this same spiel about beating Bush, being a regular American and "give me a chance" from the mouths of all the Democratic presidential hopefuls who were still running during my trip to New Hampshire. They all say they can beat Bush, but no one will come election time.

John Edwards then had a question-and-answer session, but being the smart politician he is, he explained that first he would address the most frequently asked questions. By the time he had finished those, he only had three minutes left before he had to get on the bus and head to some other frozen New Hampshire city. One voter thanked Edwards for talking about AIDS. Edwards responded that it is an area in which America can change its image around the world. Mr. Edwards is right. We can change our view, but not to the whole world, only a group I call the Axis of Weasels. The French, Germans and Russians will be happy, but dictators, tyrants and terrorists will still hate us.

A second voter asked what he thought about health care for veterans. Edwards responded that they should get the same benefits as members of Congress.

John Edwards wasted no time in leaving the Soda Shoppe. He walked quickly across the snow-covered lawn of the Laconia Mall with his eyes focused on his bus. He took a few questions from the press at the bus and stood for some pictures because he's the pretty one. As he boarded the bus, inspirational music played.

My cousin and I not only heard Edwards' speak but also visited the Kerry, Dean and Lieberman offices. This experience was well worth the freezing temperatures, the toll booths and the speed minimums. We can certainly learn about our candidates from the news, but it gives a whole new meaning to the candidate and their message to see them in person. Everyone, at least once, should go to a campaign stop, even if you don't agree with the candidate. Listen, and then make sure you vote because this is a right our country gives us and we should use it. 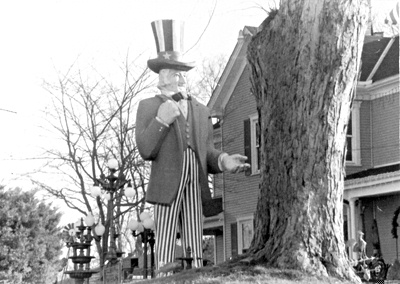