America's founding fathers rejected an aristocraticgovernment in order to create one based more on equality. Aristocracy, however,still exists in our society. American citizens are ruled not so much bygovernment as, surprisingly, by something meant only to entertain. Athletics ruleAmerica, and more specifically, they rule America's schools.

The majorityof our schools require students to take gym class. Generally, this is justifiedas an attempt to instill healthy habits in children. But shouldn't schools try toinfuse healthy cultural habits into children's minds, such as reading and writingfor pleasure, and creating art? Schools do teach these, but with an emphasis onhow to read and write. The books children must read are often dull and hard tounderstand. Writing assignments eventually turn into just essays. Poetry andcreative writing are rarely encouraged. Students eventually begin to see readingand writing as a hassle, not something enjoyable.

Art and music classesare also allotted much less time than gym. In my elementary school, we had gymfour days a week with music on the fifth and art class once a month. In middleschool, we were required to take music class for one year but gym was requiredfor all three. Some schools don't even have art or music programs, but anathletic program almost always exists, with the athletic program receiving themost money and attention.

In fact, school athletics receive far toomuch attention. Games are highlighted in local newspapers, often in a specialsection. Accomplishments of non-athletic school activities such as band, chorusor drama are rarely mentioned unless the school sends a pressrelease.

Moreover, athletic achievements are often broadcast each morningduring school announcements. Everyone hears how well the football team did, butrarely is it announced who performed a solo for the band or chorus, or even ifthere was a concert. Though other awards are seldom mentioned, if the basketballteam won districts the news would be everywhere. Schools concentrate too much onathletics and too little on other activities.

Athletes frequentlybecome heroes to faculty members because they balance school and sports. Whatabout students who work, have a learning disability or volunteer, but still dowell in school? Why is it that their achievements are hardly ever recognized?Nevertheless, administrators seem to care less. A winning sports team makes aschool look great.

Revolutionaries may have sacrificed their livescenturies ago to rid America of a ruling aristocracy, but it seems that modernAmerica is ruled by an ever-present tyrant. This tyrant, though loved by many, isbeing forced down our throats - athletics. 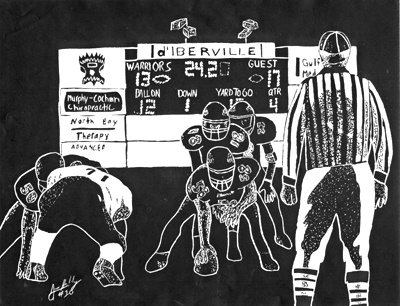