Many teens avoid work at all costs, but there are some who realize the benefit of afew hours of labor. They are the teens who work for their money rather than waitfor their parents to hand it to them, and are receiving a good dose of adulthoodthrough learning and practicing money and time management, and paying bills andtaxes. Every teenager, at some point, should have a job to prepare for theirfuture.

One of the first lessons a working teen learns is the value of adollar. Eager to spend his first paycheck, a teen will often blow it so quicklythat he is left without a penny until his next one. After that experience, hewill quickly understand how easily money is spent compared with how hard it is toearn. Thus, he learns early the value of a dollar rather than as an adult whoprays his checks will not bounce.

The working teen's peers will envy herfor the second lesson she learns: time management. While the rest of her friendsare writing essays, solving algebraic equations and conjugating verbs in classjust before they are due, the working teen will have already done herassignments. Why? Though many believe jobs lower grades, the opposite is actuallytrue. When a student knows she will be working the night before an assignment isdue, she will finish ahead of time because she knows she doesn't have time toprocrastinate like her classmates. Peers will envy her excellent time managementskills and well-rested appearance when she arrives at school with eight hours ofsleep rather than three.

"Nothing is certain except death andtaxes" is a familiar, true saying. While the part about death is important,the reality of taxes is more relevant right now, since every working individualis required to pay taxes.

Unemployed teens don't understand how muchmoney workers contribute to the government until they have a job. If one gets ajob as an adult, he will be in for quite a surprise when he realizes how muchUncle Sam "takes" from each check.

Having a job prepares teensfor the wonderful world of bills. Although most will only have a few expenses- a car or credit card, for example - they will discover the rewards(good credit) or consequences (bad credit and debt) of paying bills. They willacquire the ability to set money aside for emergencies (Wow! I used my creditcard a lot last month!) or open a checking account if they realize they don't dowell with cash. (Oh dear! I lost a twenty!)

Despite critics' beliefs thatjobs hinder a teen more than help, there are more advantages to having a job thanbeing unemployed. Even if only during the summer, everyone should work duringtheir teen years to better learn essential "adult skills." 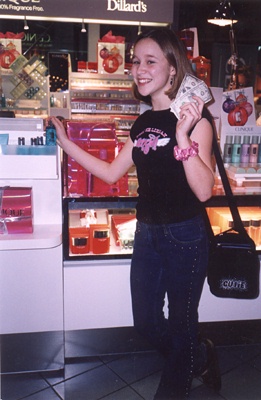