September 11 was a tragedy that will go down in history as the worst attack ever to occur on American soil. About 3,000 people died that day, but the people of the United States have risen to the occasion and shown a sense of patriotism I never thought possible. The American flag is everywhere,and hardly a day goes by when I don't see someone at school wearing patriotic attire.

I am pleased that we have not let ourselves be crushed by the devastating blows dealt us, but enough is enough. For awhile, the flood of red, white and blue merchandise was uplifting. The increase in the number of flags and the flag symbol on clothing and other merchandise made me smile and remember days when most teenagers rarely stopped to think what their country meant to them.

But how much is too much?

September 11 was a tragedy of momentous proportions, but patriotism has taken advantage of it. Companies realized that because people feel so passionately about their country in the wake of the attacks, they can slap some good ol' red, white and blue on their products and make a few extra bucks, knowing that people will eagerly purchase them just to have a piece of the tragedy. And we are buying it up like lemonade on a summer day.

I've seen patriotic shoelaces, paper clips, pencils, even star-spangled pillow-cases.Countless books have been published, TV programs aired, websites created. Every manufacturer known to man has been producing t-shirts that say "Remember 9/11," but what really gets me are the NYPD and FDNY hats that are circulating. So much money has been milked out of this one horrific day that I'm almost positive we could feed the hungry children across the world for a very long time with it.

I'm certainly not trying to force people to stop singing the National Anthem, I simply don't understand why so horrible a tragedy, with such a high loss of life, must be accompanied with its own line of t-shirts. Can't people remember the tragedy by attending memorials? Or by giving money to charities set up to help the victims' families? By celebrating life, instead of dwelling on the tragedy? It just doesn't make sense.

So what if the day is permanently remembered by its own fashion brand? Go ahead, buy a t-shirt. Stock up on red, white and blue paper clips. I won't even complain if you outfit your entire bedroom in the American flag. But next time you're in a store, see that 9/11 top and say to yourself, "I'd look good in that!" just step back and think for a moment.

Are the deaths of 3,000 people worth you looking good in a t-shirt? 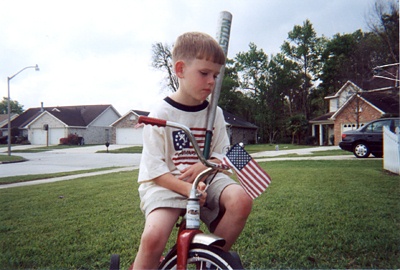 On another note, why are some words in peices published in the magizine jumbled together likethis? I don't understand....