Since September 11th, allNew Yorkers have needed prayers, hopes and dreams from others for their lovedones to be safe. A ramp across Ground Zero can help this process. As people walkacross it, they write prayers or memories on the railing. This is why I believethat tourists, and New Yorkers, should be allowed to look at this importantmemory of our country. It means so much to the thousands who lost lovedones.

"The voices in the crowd fall silent here; the stones couldwhistle in the wind." This is how The New York Times describes the newviewing platform. As many have gathered on it, people felt increased sympathy forthose who lost someone, and for those who survived. Many believe that this isturning the site into a tourist attraction, but this does not seem to be thecase.

"We're just trying to do something to make it easier forpeople who are trying to pay their respects," Mayor Michael Bloomberg said.I completely agree. Paying respects is what people really want to do, not see anattraction. One observer at the ramp said, "I was freezing cold. But as soonas I saw the site, it warmed me." She decided to visit Ground Zero on NewYear's Day. This shows it isn't a tourist attraction, it is a special place thatwarms people's hearts. They know they are visiting the souls of those who werekilled.

The site also makes you realize that people don't come there justto see Ground Zero, they come to feel they are there for the families who losttheir loved ones.

"It is imperative that ordinary citizens be allowedto see, remember and pay their respects to the thousands of lives lost in thisunprecedented act of cruelty," said another observer. This is how many thinkof the new viewing platform idea - a way to see Ground Zero as a historic memoryof the United States.

Although some find it an invasion, most New Yorkersfeel the need to be able to visit pieces of their memory. Former Mayor Guilianisaid, "Come here and say a little prayer and reflect on the whole history ofAmerica." I couldn't have said it better myself. This attack was on allAmericans, and the WTC is a memory of our nation and the world as well.

In order to see Ground Zero, you must obtain tickets at South Street Seaport andthen stand in a long line. This time commitment discourages those who are notserious about visiting the site. Only those who feel very strongly about saying aprayer for missing friends and countrymen would go through this effort.

"The point is not to see everything. It is to feel what ishere," said a visitor from France.

I believe that clearing the siteat Ground Zero in preparation for a memorial, or new buildings, should be viewedby those who want to be a part of it. People seem to want to pay their respectsto those who rest there. To be kept away from the physical site is at odds withpeople's desire to help those around them. Some people even feel that the soulswho rest there need to know that others care about them So why can't the soulswho rest there feel the love, and compassion from people around the world? 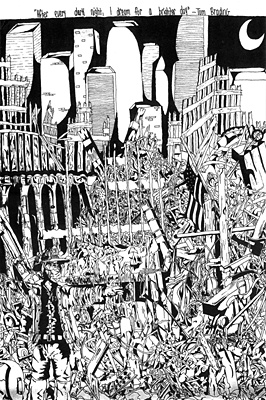