In Tinker v. Des Moines (1969), the Supreme Court ruled that the First Amendment applied to public schools and that administrators had to provide constitutionally valid reasons for any specific regulation of speech in the classroom. However, in the 1986 case Bethel v. Fraser, it was ruled that educators were not violating students’ First Amendment right by censoring the content of their speech or writing. So are we, as students, protected by the First Amendment or not? Should we be able to write about a controversial topic as freely as any adult?
I believe we should. The First Amendment applies to everyone, and under the First Amendment, we have freedom of speech, freedom of the press, freedom of religion, the right to assemble peacefully and petition the government. Freedom, by definition, means the right to do as you please without restriction. Freedom of speech “within reason” is no longer freedom of speech.
Students should have the same rights as adults dobecause censorship limits creativity. It restricts not only how we write something, but also what we can write about. Students are discouraged from exploring and debating important topics simply because an issue may be deemed “too controversial.” This limitation applies to what a student chooses to write about in an essay, draw in a picture, or even display on a T-shirt. There should not be constraints on how students can creatively express themselves. Creativity in itself is the free form of ideas.
What’s even more disappointing than this prejudice is that most young people aren’t aware of the restrictions they live under. Censorship sets unclear boundaries about what is okay and what is inappropriate. We all know the basics: we aren’t allowed to use profanities, and create images or essays that touch on drug use, violence, gangs or sex - however lightly. But did you know that you can be suspended for what your teacher or principal considers unnecessary expression of your religion or sexual orientation?
In 2002, Natalie Young of Queens, New York was held at the principal’s office for three hours because she was wearing a shirt that proclaimed “Barbie Is A Lesbian.” Her principal refused to let Natalie leave until she changed. The shirt was in no way disrespectful or offensive, and it followed the school’s dress code. “Schools cannot legally engage in this type of selective, content-based suppression of speech,” Young’s lawyer fumed. “If she had worn a ‘Barbie Supports the Troops in the War in Iraq’ T-shirt, she would have been called a patriot.” How can we know if we’re crossing the line if we don’t know where it begins?
Censorship in schools violates students’ First Amendment right; it limits creativity, and it stems from a law that leaves a good deal of gray area and room for misinterpretation. This makes the power to censor easy to abuse. If you are still thirsting for more justification, I’ll leave you with this: as declared in the Tinker v. Des Moines case, “Students do not shed their constitutional rights at the school-house gates.” And that ruling, in itself, should be explanation enough. 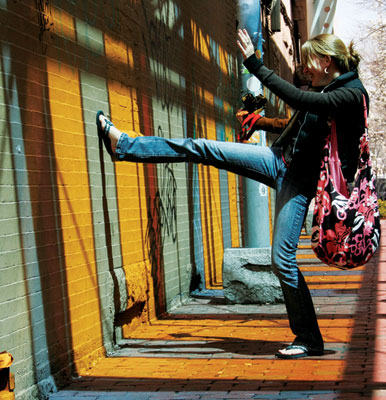 bethanyw said...
on May. 24 2016 at 9:37 pm
i love this! i am trying to write a similar article and it was very helpful to see an example. I agree; although not everyone agrees with every form of speech, they should not be limited to protect someone's feelings or because one person deems it inappropriate. thank you for sharing!
Allen. PLATINUM said...
on Feb. 17 2016 at 9:28 pm
Allen. PLATINUM, Palo Alto, California
32 articles 9 photos 525 comments

View profile
This is so well written and I like it very much, though I do disagree... a little? I think there are certain things (e.g. racism or sexism) that should be censored. But that Barbie shirt sounds lovely.
Max. said...
on Dec. 2 2013 at 11:00 pm
You are right, but I'm thinking there's a reason why people aren't allowed to wear "Barbie is a lesbian" T-shirts out in school public...Even though it is NOT right for our freedom of speech to be taken away, there's a bit of sense behind everything...
Rachel.Sharon said...
on Mar. 27 2009 at 2:16 pm
I think that whoever you are Emma, you are a very smart girl and I agree with you 100 percent!!