On the Brink of Socialism | Teen Ink

On the Brink of Socialism

The United States of America will soon be a socialist nation. Okay, maybe I’m being a cynic, but the policies of the current administration make my stomach churn. Barack Obama seems to be walking the country down the road to socialism. Conveniently for him he doesn’t even have to blindfold the American people because they’re already closing their eyes. The U.S. is on the brink of socialism because of the government’s reaction to the economic crisis and the apathy of the American people. 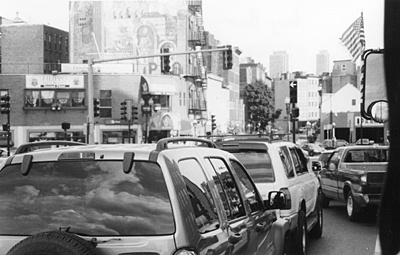 This article has 20 comments.

View profile
Personally I think it would be a good idea to raise taxes on businesses but offer rebates based on how many people they are creating jobs for, what environmental protection measures they have in place, how well they treat there employes, and other similar criteria. That way not only would the taxes probably be less than what we started with but businesses would have more incentives to create jobs and do other things that are beneficial to our country and more importantly the people in it.
Hawthorn BRONZE said...
on Jan. 24 2012 at 11:07 am
Hawthorn BRONZE, Nowheresville, Maine
3 articles 0 photos 55 comments

View profile
yep. Thomas Paine was one of the first founding fathers to realize the value of propaganda that was more than half true and often quite witty. The american revolution wouldn't have happened as quickly without him
. said...
on Jul. 29 2011 at 9:47 am
mutualism a form of socialism invented by pierre joseph proudhon. in this theory the state is abolitioned and every person owns a means of production. things are traded or bought depending on the theorist, for there value not for profit.
StanHubertson said...
on Aug. 15 2010 at 12:23 am
StanHubertson, Oak Park, Illinois
0 articles 0 photos 29 comments
View profile
Tell me, do you consider Thomas Paine a founding father?
Austin said...
on Aug. 13 2010 at 12:09 am
I support the hard working American who is struggling to support his/her family paycheck to paycheck. History has shown that capitalism helps these types of people and socialism hurts them.  That is a fact.  Do you even realize what all of the blood sweat and tears was for? It was for capitalism. It was for individualism; the entreprenuerial spirit, freedom, limited government.  Things that our Founders ingrained in us to make us prosper.  Why don't people like you listen to that? These ideas among others have proven to help the people IN our country.  What are your ideas to help them?
StanHubertson said...
on Aug. 11 2010 at 1:17 pm
StanHubertson, Oak Park, Illinois
0 articles 0 photos 29 comments
View profile
Perhaps because I am too middle class to afford a move to one of those countries or to suddenly uproot and move? Make my parents give up their jobs to come with me. You sound like an ignorant nationalist. I know what it took to build this country, the blood, sweat and tears of the working class, apparently you have forgotten. Evidentally I love this country more than you do because I love the people IN IT, I realize what they need to live prosperously and I know it isn't capitalism. You might love this country, the notion of the United States, but I love what it's made of.
Austin said...
on Aug. 10 2010 at 5:16 pm
I accidently posted my last message at the top.
Austin said...
on Aug. 10 2010 at 11:01 am
This is really sad that I have to defend America and that there are people like you out there who hate this country.  It's insulting not only to me but to the founding fathers and our troops who have died to make this the best place in the world to live.  You sound like an ignorant socialist who has no respect for what it took to build this country.  And don't talk to me about poor people. I've worked with some of the poorest people in is this country and they would rather be here than in Canada, Denmark, or Norway.  If you want to live under the soft tyranny of socialism and give up your freedoms then why don't you move to Canada?
StanHubertson said...
on Aug. 9 2010 at 10:09 pm
StanHubertson, Oak Park, Illinois
0 articles 0 photos 29 comments
View profile
Are you high? the United States has one of the largest poverty scales in the world. The three best countries according to the United Nations since the 1990s have been Canada, Norway and Denmark (Norway and Denmark of income rates of above 60%)
Austin said...
on Aug. 9 2010 at 10:00 am
What is wrong with profits?  I started a landscaping business this spring with one thought in mind.  To make a profit.  Now keep in mind in order to do that I have to treat my customers with respect and be ethical or my customers will stop hiring me, and I will stop making a profit.  Profits motivate me(and all entreprenuers) to provide a legitimate good or service at a fair price that will improve the lives of my customers(their yard looks nice and they paid less than they would for a more experienced service).  And then I also hire my friends for more than they make at their regular jobs - in turn improving their lives as well. When you have millions of businesses doing this very same thing, millions of peoples lives are improved every day.  And if a business is blind to social commitments - I don't know if this is what you are talking about but say a company does not allow homosexuals to work for them(an outrageous, unethical business move) - this will get in the news and people will stop buying the good or service that the company provides, and the company will go under.  The same would be true if a company did something racist.  I trust my fellow man, with the help of the media, to oust  these companies that do such terrible things.  And this has happened in the past.  Where we run into problems is when the government tries to get too involved.  For example the Community Reinvestment Act of 1977 forced banks/mortgage giants to give out subprime loans which led to the housing bubble.  I want you to do me a favor: next time you are driving look at the businesses located in your town.  I challenge you to tell me how they are not providing your town with a valuable good or service.  Go into one of these entities and talk to the owner or manager or sales rep and tell me how they are not your fellow man.  I challenge you to tell me how you can't trust them.  I challenge you to go into your nearest bank - count how long it is before someone says "can I help you." Is he or she not your fellow man?  After checking out a couple of businesses go home and think about these businesses and the entreprernuers who started them. I challenge you to tell me why the owners created these businesses.  And then tell me how America has the highest standard of living and is the land of opportunity.
StanHubertson said...
on Aug. 8 2010 at 10:07 pm
StanHubertson, Oak Park, Illinois
0 articles 0 photos 29 comments
View profile

The reason for Greece's economic collapse is the faulty lending practices done by the bankers. It kills me when people bring this up because they always mention the riots in Greece. To stop you from mentioning that I would like to say briefly that the riots in Greece being done are in aprehension of the tactics used by the IMF, i. e, the breakup of the unions and the loosening of regulation.

Nextly, about whom will I put my faith? I think my fellow man is a good place to start. And if your too ignorant to see that a corporation or a bank, something with no social commitments is interested in only seeing a profit I think you've got your head shoved somewhere unpleasant.

In my response I will directly quote Glenn Beck, "You will wake up one day America, and you will be in a different country than the one you went to sleep in."

In terms of financial regulation, here's my idea of financial regulation, the banks willingly bet against the people, the banks did this not only in our country, but in nations around the globe. This idea should be attributed to Milton Friedman (who was deeply involved in the IMF) and helped set it up so that it would create Libertarian economies in whichever country needed an economic bailout, but, furthermore, my idea would be (appealing to both capitalists and communists on this) would be to let the banks fail because of their heinous crimes (appealing to Capitalists) OR, have the government nationalize the banking system and regulate them within an inch of their lives and stop this from happening again.

Trusting business is useless. Business has no social commitment, therefore we have no interest in trusting that they have our best interests at heart.

Austin Nissly BRONZE said...
on Aug. 6 2010 at 11:08 pm
Austin Nissly BRONZE, McMurray, Pennsylvania
2 articles 0 photos 2 comments
View profile
The liberal push toward socialism is not a revolution.  When Beck says that I don't think he means that America will become socialist overnight.  What I think he means is that America is slowly becoming more and more like Europe.  Measures such as the financial regulation bill, the health care bill, cap and trade, the bailouts, and the stimulus make me feel like we don't trust the free market anymore and government must get involved in every aspect of business.  Do you agree?
StanHubertson said...
on Aug. 6 2010 at 6:19 pm
StanHubertson, Oak Park, Illinois
0 articles 0 photos 29 comments
View profile
I invite you to examine the histories of the Russian Revolution. If Obama is radically changing our country to socialism it's like no revolution I've seen and I can't wait to "wake up one day" as Glenn Beck says and see a socialist nation the next.
HOPEMVP said...
on May. 5 2009 at 6:05 pm
I TOTALLY AGREE
Austin Nissly BRONZE said...
on Apr. 20 2009 at 3:00 am
Austin Nissly BRONZE, McMurray, Pennsylvania
2 articles 0 photos 2 comments
View profile
Thanks for the comment "sunshineyday." What happened when Bush cut taxes after the dotcom bubble burst? The economy got back on track and unemployment went down!!! What happened when Arnold took over California and implemented his liberal tax policy? High unemployment and disaster!!!:( I would also like you to check out the tax system in Texas and look at how their economy is doing. Thanks
Sunshineyday said...
on Apr. 19 2009 at 1:17 am
Good writing but I entirely disagree! Bush's "trickle-down" theory was a load of junk! We can't focus on tax cuts to make the rich richer while the poor get poorer.