What have you lost when recreate yourself into someone you really aren’t? Absolutely everything.

Conformity is causing eating disorders, cutting, and in extreme cases sometimes suicide. Obviously there is something wrong with people harming themselves to at attempt the perfect image. Well, being perfect is a point of view through someone’s eyes. Perfection will never be reached, and it defiantly won’t come with a razor to your wrist and your fingers down your throat. Being so skinny you can count your scrawny ribs is never attractive.

I believe that if more celebrities would speak out about conformity and the dangers of side effects, it wouldn’t be such a big issue. Getting drunk at parties and getting so high you can’t think isn’t the way to become successful. Girls are still beautiful regardless of how many shots they took at last nights party or what number the scale gives them. Guys will still be looked at as tough if they just say no to having sex, cutting, drinking, and lighting up. Anyone can say yes, but it takes someone very strong to say no. Conforming won’t make you look any cooler or prettier; it just makes you look like a fool.

If people heard the truth about how amazing they truly are at a younger age maybe they wouldn’t ruin would they are to become something they aren’t. Teach, watch, listen and learn about the issues of today, you will be part of the solution tomorrow. Help be a fight against conformity! 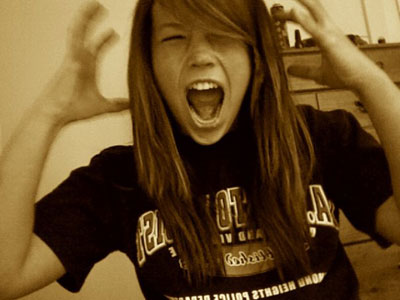 The author's comments:
I think it's sick how girls are starting to change to the point where they would drop 20 pounds to look like a model. You can be beautiful just way you are by being yourself.
Post a comment
Submit your own

View profile
Opinion
Harry Potter and the Fight for his Identity
By nelsonzirzow BRONZE
Hartland, Wisconsin
nelsonzirzow BRONZE, Hartland, Wisconsin
1 article 0 photos 0 comments
View profile
Opinion
OMG! He did what?! NO WAY!
By LilaW PLATINUM
Brampton, ON, Other
LilaW PLATINUM, Brampton, ON, Other
21 articles 0 photos 43 comments

Favorite Quote:
"History is the key to the future"--Melinda Emerson
"Never tell the truth to those unworthy of it"--Mark Twain

JaxBby said...
on Oct. 11 2012 at 2:37 pm
YES! People need to be themselves and stop trying to fit in. There's nothing wrong with partying as long as it's what YOU want to do and that you're doing it because you want to, not because others want you to. Being thin isn't something that should be on your top priorities. You should be happy with yourself.
erins1234 BRONZE said...
on May. 2 2011 at 12:24 pm
erins1234 BRONZE, Parkesburg, Pennsylvania
1 article 0 photos 1 comment
View profile
I totally agree! People have to stop trying to be someone else and be true to themselves.
paleteenager PLATINUM said...
on Feb. 3 2011 at 3:46 pm
paleteenager PLATINUM, Fountain Hills, Arizona
39 articles 0 photos 38 comments
View profile
I completely agree. Glad to know there are still people out there who have a genuine personality.
bubbleburster said...
on Nov. 29 2010 at 12:05 pm
it's nice to know that someone is using their head for more than a hat rack!  i made a lot of mistakens in my life...i smoked and starved myself to look, what i thought, was pretty...which almost led to suicide.  i'm glad that someone realized this problem and is trying to do something about it :D
sphinxmuse said...
on Nov. 4 2010 at 2:43 pm
This article is awesome.  I've got some students I plan on sharing this with.
respecturself7 SILVER said...
on Mar. 8 2010 at 5:36 pm
respecturself7 SILVER, Medina, New York
8 articles 0 photos 76 comments

Favorite Quote:
There is a natural law in life to settle.....I broke that law ~Katherine Hepburn
Love, Is the severest of mental diseases~U.K.
Spinning always spinning....when life puts me down I'll give you a call~respecturself7

View profile
Finally! Someone with a brain:) Conformity has become an epidemic. Everywhere you go you see cheap imitations of someone else. Sometimes I'll go to the mall and be sitting on a bench watching people and it freaks me out. Everybody looks like they're an identical model of the next, like, the factory just popped them out and they're just out for a brief stroll. Sometimes I think I can smell the plastic still warm from the factory! lol
caitydagreat said...
on Jan. 25 2010 at 4:58 pm
omg i totally agree with u!!! but its hard 2 go bak 2 being urself wen u alredy started being someone else! nice article