How the Media is Brainwashing Our Perception of Beauty | Teen Ink

How the Media is Brainwashing Our Perception of Beauty

“Perfection is the disease of a nation, pretty hurts…” (Coleman, Furler, Knowles). Beyonce’s popular song Pretty Hurts reached number thirty two on the iTune’s top songs chart. The soulful ballad preaches about ignoring media’s beauty standards and accepting yourself for who you are. While Beyonce leads you to believe it’s ok to have flaws and showcase them, she contradicts herself by releasing photoshopped images on her social media platforms and other outlets like magazines. Beyonce isn’t alone, it’s extremely rare to see a non-edited image of a model or celebrity in today’s media. This insane obsession with thinning, de-wrinkling, smoothing, and more is creating an unattainable beauty standard for women and men across the globe. It is time for magazines to stop editing and start embracing individuals for their true appearance.


Photoshopping images in the media are creating an unhealthy portrayal of men and women. At just the click of a button it is extremely easy to visibly change the appearance of a photo. According to the New York Times article, A Start-Up Figures Out Photoshop Abuses, Hany Farid, a professor at Dartmouth, has created “a pixel-sleuthing program to detect how much fashion photographs have been burnished with Adobe’s Photoshop editing program to remove wrinkles and flab, while plumping up lips and breasts.” This software helps to disclose just how fake photographs today can be. Sarah Dissault, a fitness expert, after taking photos and having them professionally edited with photoshop was told by editor Tim Lynch, “if you train full time as a pro athlete with trainers and ate the way you’re supposed to eat your body could probably get close but who has time” in response to what her body looked like after dramatic editing. It is impossible to achieve the so-called “perfect” appearance depicted in the media. I think it’s time to stop body shaming men and women who don’t meet the impossible standards created by the media and start embracing their flaws, wrinkles and all.


Unhealthy trends in the media have set body standards physically impossible for women to meet. In past years, a thigh gap trend has left women shaming themselves and others who don’t have a space between their thighs. Photos of Target’s swimsuit collection were edited to create a thigh gap between the model’s legs. Marcie Bianco, in the article The Media’s Obsession With Photoshop Has Gone From Feminist to Destructive, stated, “not only are thigh gaps exceedingly rare, impressionable teens need to realize that the body mass necessary to be so thin your inner thighs do not touch is bordering on skeletal.” 70% of young girls feel that the appearance of models influences their image of what a perfect body should look like. Global toy icon Barbie introduces to young girls what type of body and face they should aspire for, without informing them of how unrealistic her appearance really is. “Researchers generating a computer model of a woman with Barbie-doll proportions, for example, found that her back would be too weak to support the weight of her upper body, and her body would be too narrow to contain vital organs” (Kogler, Stevenson). Extremely successful actress Kate Winslet was enraged after men’s magazine GQ photoshopped her cover photos to make her appear thinner and taller. She commented, “I don’t want people to think I was a hypocrite and had suddenly gone and lost 30 pounds, which is something I would never do, and more importantly, I don’t want to look like that!” A similar incident happened with Brad Pitt. For his W magazine cover he requested there be no retouching on his photos and even hired Chuck Close to shoot it, “a photographer known for his extremely detailed portraits that expose skin flaws” (Diller).


This process of continuous editing until models resemble a distant version of themselves needs to end. The average teenager is exposed to around 180 minutes of media a day, including commercials and ads which have been photoshopped to depict perfect people. This is brainwashing people everywhere to hold higher standards to what people should look. 5’10”, clear skin, perfect tan, d cups, 120 pounds is not what an average woman will look like and instead of photoshopping models to look like that, magazines should embrace curves and imperfections because let’s face it, we all have them. In the New York Times article, Unhappy With Your Looks? Or Is It a Disorder?, it states, “more than half of all women - 56 percent - and nearly half of all men - 43 percent - said they were dissatisfied with their overall appearance.” Photoshopping does nothing but continue to perpetuate this standard of beauty created by a society seeking perfection. Freckles, wrinkles, curves, blemishes, stretch marks, flab, and more are nothing to be ashamed of. They make up a person with intelligence, talent, and value. I challenge magazines and media everywhere to highlight these factors more than appearance. I want to be shown true images, not lies to deprecate my self esteem. It’s time to “look to the mind, and not to the outward appearance” (Aesop). 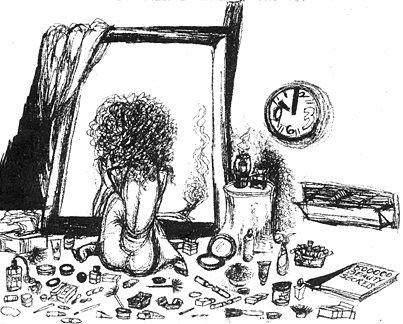 I hope this offers insight to people everywhere who feel insecure due to images presented in the media. You are beautiful, and unrealistic goals of beauty presented by photoshopped images should not make you feel otherwise.

MTM. said...
on Mar. 19 2015 at 8:32 pm
Great article! Perhaps you can write another article inspiring teens to use their influential buying power to drive the change you want the media to make. The Millennials (anyone born between 1980-2000) are an important demographic to magazines and marketers (see goldmansachs.com/our-thinking/outlook/millennials/index.html?cid=PS_02_18_07_00_00_15_01) See how this teen was able to get Gatorade and Powerade to remove a dye in their drinks (change.org/p/powerade-if-gatorade-can-take-crazy-chemical-bvo-out-of-sports-drinks-so-can-you) Keep up the excellent writing!
Ashley M. said...
on Mar. 19 2015 at 2:50 pm
Well done! I agree 100%! Unfortunately, I don't think it will ever happen.