I sat with her at the edge of
a world working without us,
that we were never a part of,
and watched it commit suicide

light flashed from various sources,
and the roaring of the fire drowned
out any screams – sparks dispersed in
the darkening sky, and for miles and miles
the land was engulfed by the demons
its people had unleashed themselves

the destruction thrived with seemingly
infinite energy (though we knew it
would not last), and did not discriminate
among its victims; pure chance judged
what was to be crushed, exploded,
or shot by a budding psychopath –
and then the fate of said psychopath

and when there was nothing left to burn
and the fire finally flickered down, tired
and burned out for the night, when
the world went to sleep with the
ending of an era and broke the
trance it had put us in,

she turned to me – goddess,
deity, with her detached look
and eyes that shone with sympathy
but were underlined with wisdom
and a profound understanding
of our place in this burning sacrifice,
and said:

“The sun has set – What shall we do tomorrow?”

I smiled then, for the first time since
the slaughter had started below us,
and told her of my plans for rebuilding
the world the next day, forever marked
in human history as a beginning, and asked
for her opinions and suggestions

when the dawn came poking through the smoke,
we walked down solemnly to the charred city
to salvage whatever we could together 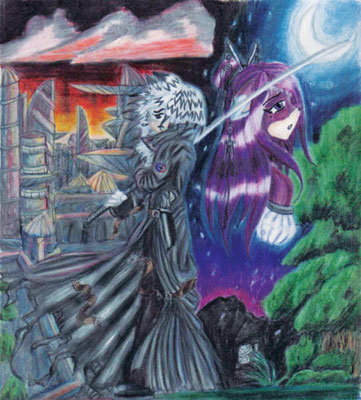