If The Sky Could Taste the Moon | Teen Ink

If The Sky Could Taste the Moon

In the midst of rain

a pit of fire, central, small, kindling in the midst of rain

huddling for its Warmth, its Sanctity, its Intensity, its Intimacy, its Secrecy

difficult knowing how many

swarmed in a circle of Fulfillment

around goes the Sweet breast

a carwash situated on the path of this circle

aimed, charged, powered at what comes around

are devoured, consumed, and finally expelled

out of the backside of the carwash

go around the circle manipulating, heating, oiling, and beating

challenging each other to the end of the circular path

the second rotation trails the trail with grime

and the third picks it up

has been ruined into Hatred

surrounding the fire, listening to its song

but smothering it with their Obsession

wonder if the sky could taste the moon

this fire would be the Prosperity of their whole lives, their Meaning

and beyond the rooftops of steel, rust, grime, mechanics

a rainbow gifts the unreachable in a veil of chromatic Melancholy

on this rainbow, in the corner of the seven’s eyes

is seen a white-bearded man, walking along

painting the final touch to the neverending semicircle

the seven never see where it starts

nor where it ends

they never see where it marks

nor where it stands

they never know if it’s in front of them

they’re never sure of its Existence

the white-bearded man motions for them

the rain has become dry

the rainbow is dispersed among the fog

the fire is extinguished, its song is no longer

in its Absence, she hears Nothing

she is deafened by the Silence

and was blinded by the rainbow

and desperately tries to rebuild what once was

to create what is forgotten

to rekindle the fire that is her ears

and the rainbow that is her eyes

and the song that is her Hope

other sparks appear around her

but she doesn’t notice them

her senses are set on this fire

it is her Fulfillment

the fire truly gives her Prosperity and Meaning

other sparks appear around her

but she ignores them

wisping at the edges of her wedding gown, one finally grabs hold

and sets her ablaze

she can’t feel Anything

her Devotion numbs the pain, the Glory

it's been years, centuries, eons

how can one tell?

But in this storm of Absence and Stagnancy, the Calm comes to disturb it all

a spark finally shoots in the pit

and an ember is born

there lays the white-bearded man, next to the ember, covered in oil

He opens his flammable eyes

picks up His paintbrush 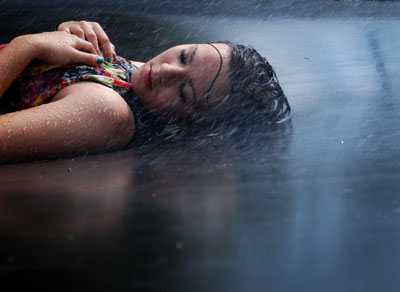 My name is Ethan Ocasio and I am the author of this piece. I normally write academic essays and reviews for local high school plays, but this is a style of writing that I practice occasionally. I wanted to attempt surrealism and absurdity with this piece, and I did not intentionally include a deeper meaning. Anyone can interpret the piece how they see fit. My inspiration came when I walked outside of my school and saw a group of kids roasting marshmallows in a flaming grill during a downpour. Looking over the roof of my school, I saw a rainbow. The kids trying to sustain a fire during a storm while a rainbow hangs over them seemed like a spiritual experience.